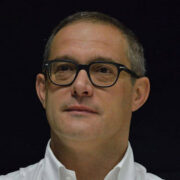 Born 30 years ago as a synthesis of the best automotive technology, this marvel made up the DNA of Bugatti hypercars

Life is made of history. Dates and anniversaries that alternate and intersect like an inextricable fabric of invisible threads. 110 years after the birth of Ettore Isidoro Arco Bugatti, the Bugatti EB 110 GT was presented in place de la Défence in Paris. It was September 14, 1991. Exactly one year earlier, in Campogalliano, in the province of Modena, the new factory of the revived Bugatti Automobili was inaugurated, rebirth of the legendary car brand strongly desired by the entrepreneur Romano Artioli. Who, already on December 1st 1992, delivered the keys of the first Bugatti EB 110 GT to the lucky customer F. Messner. 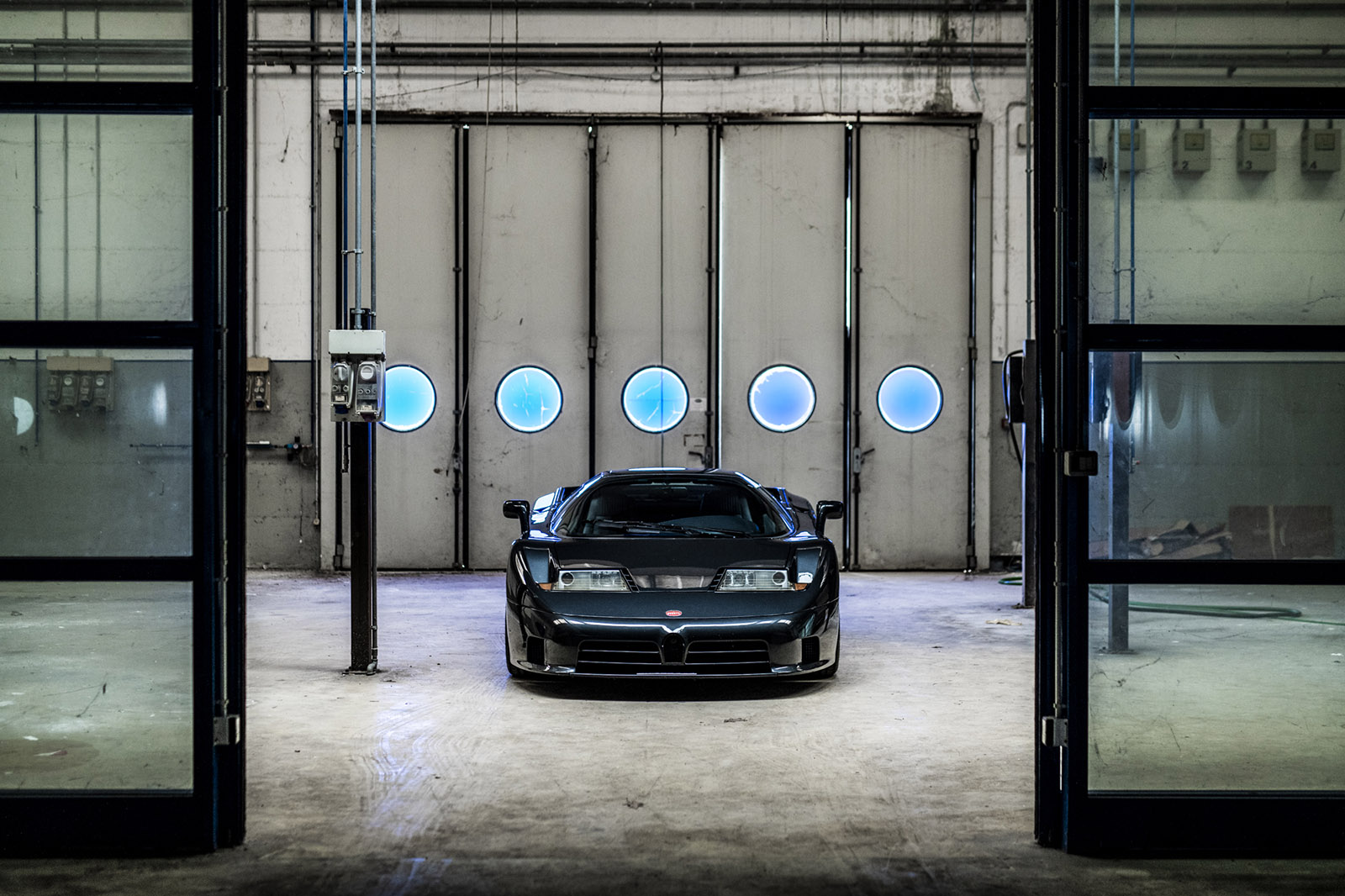 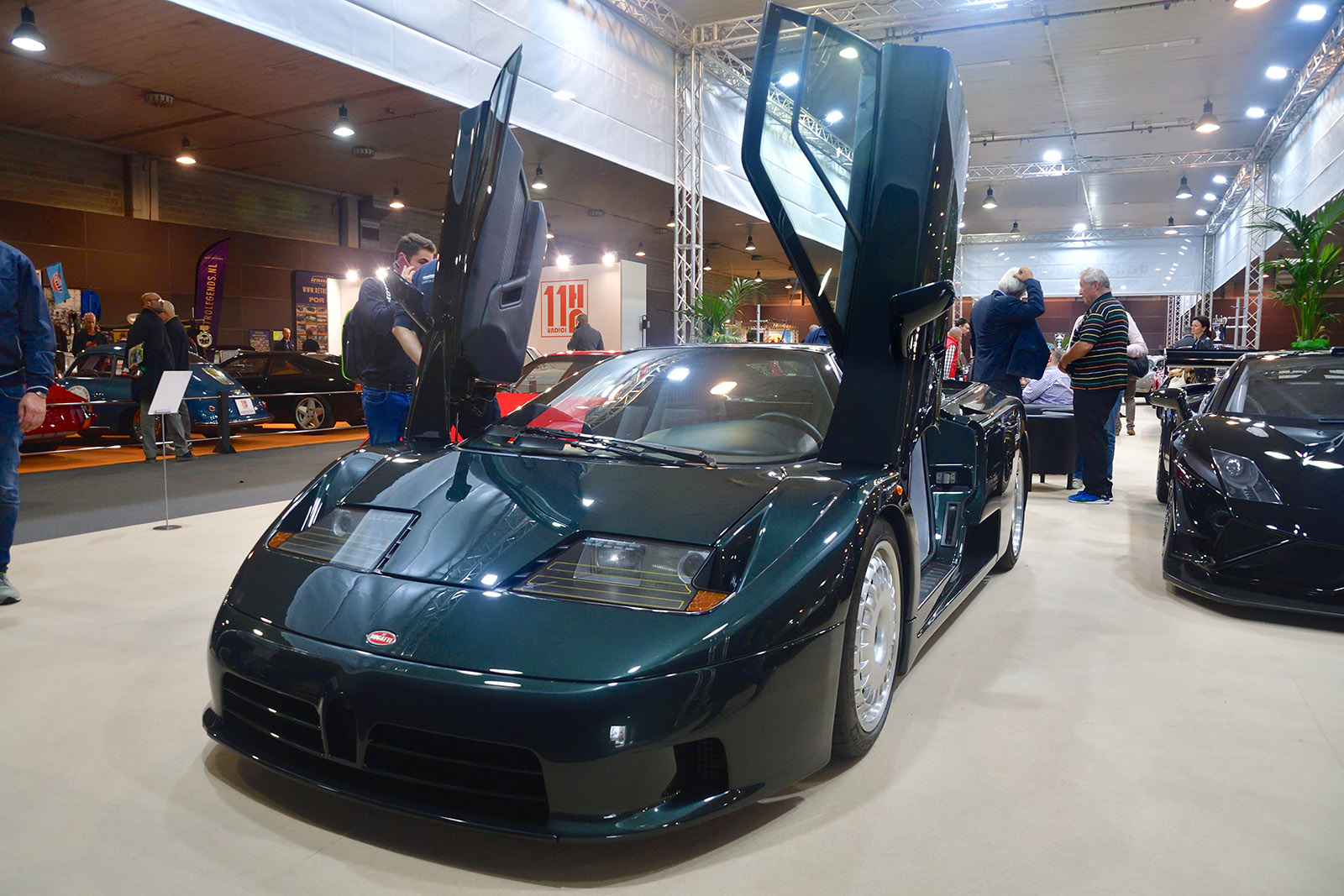 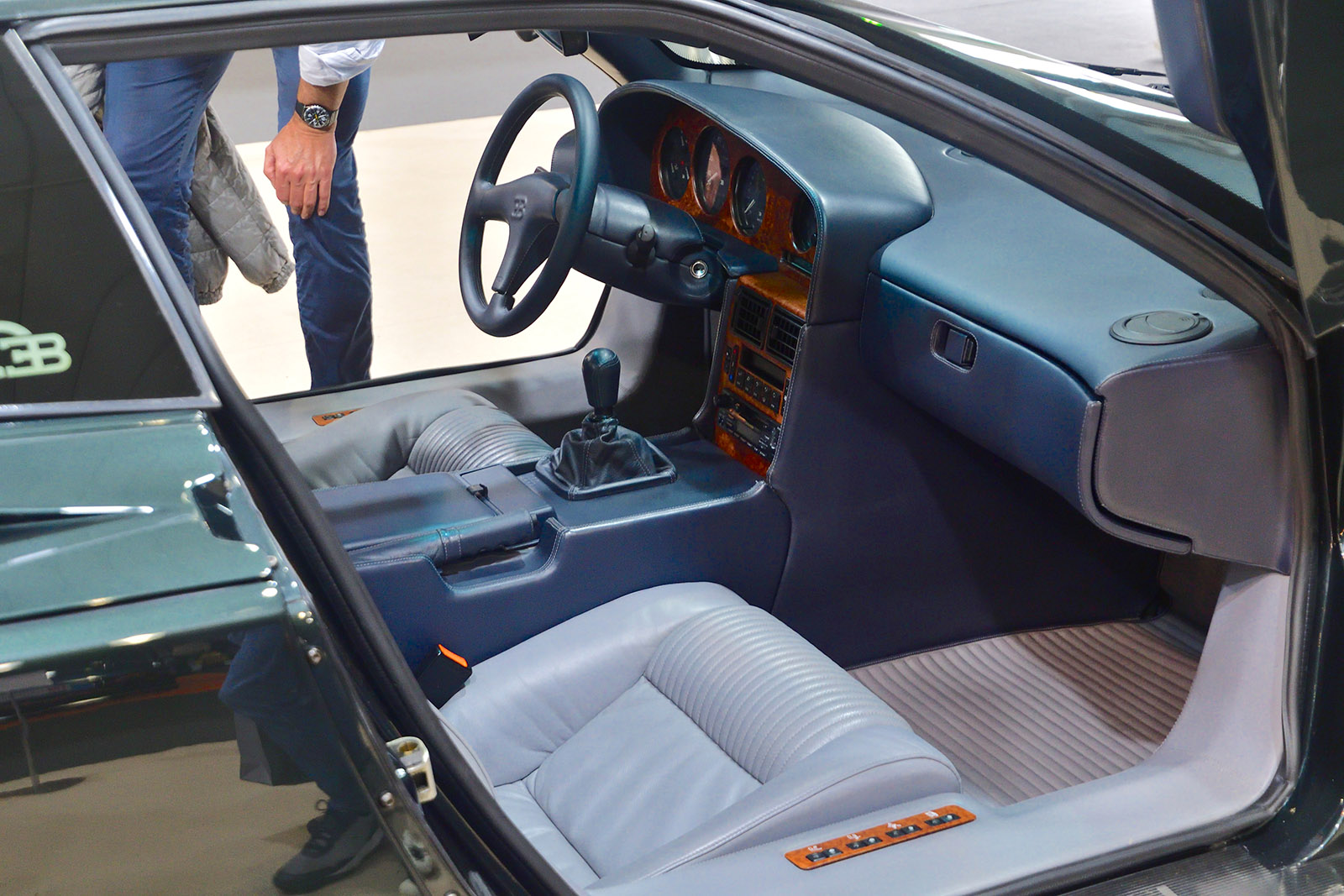 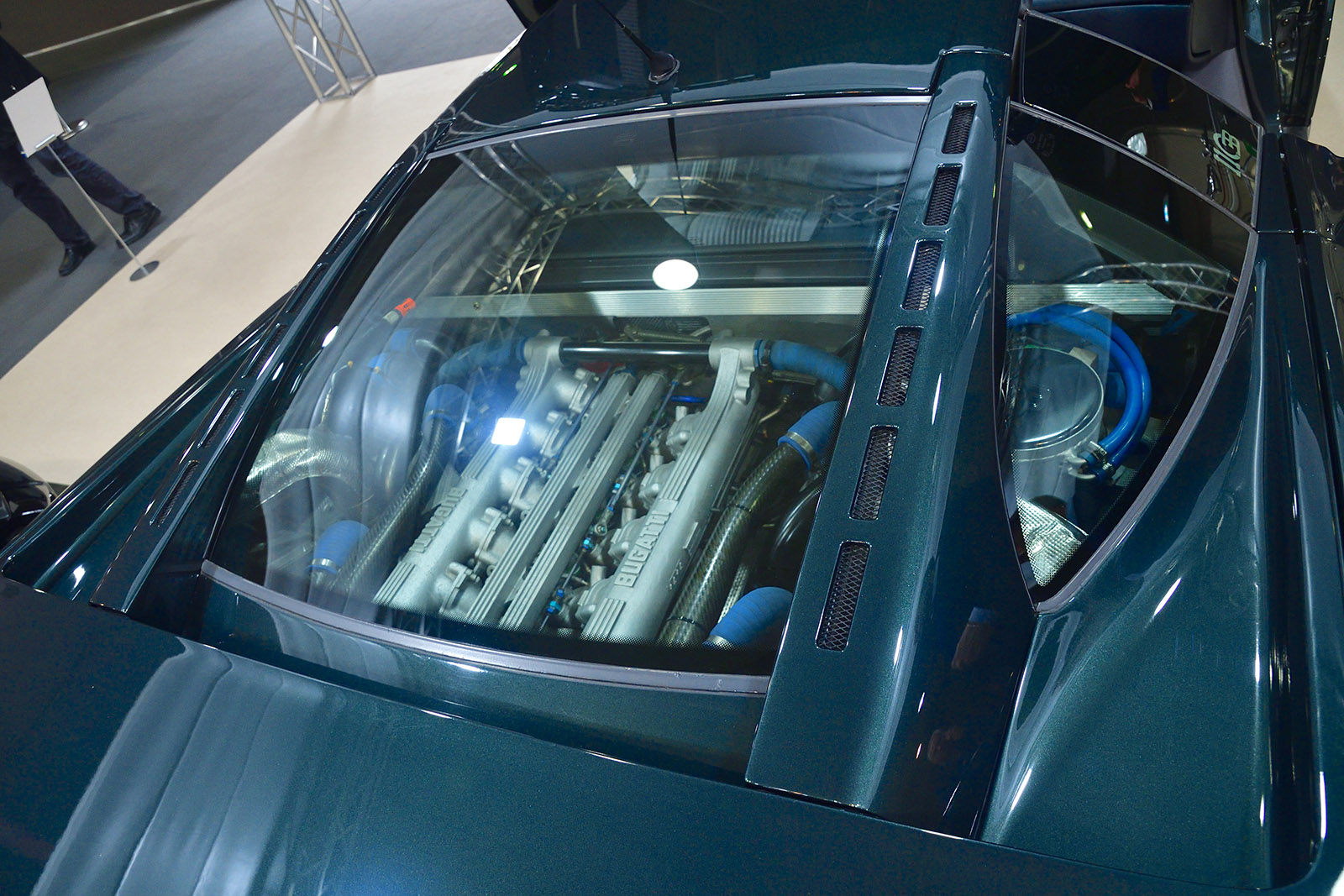 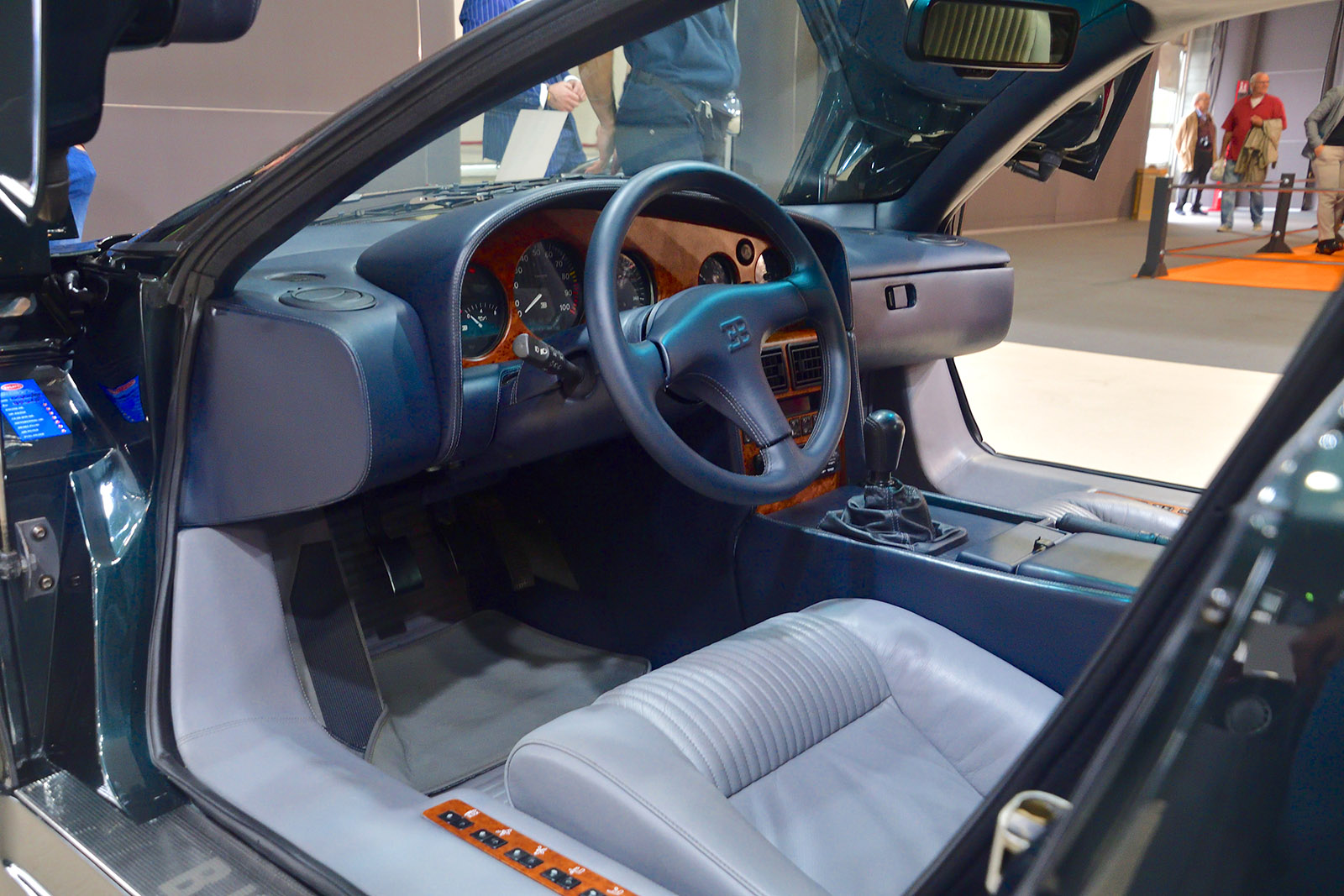 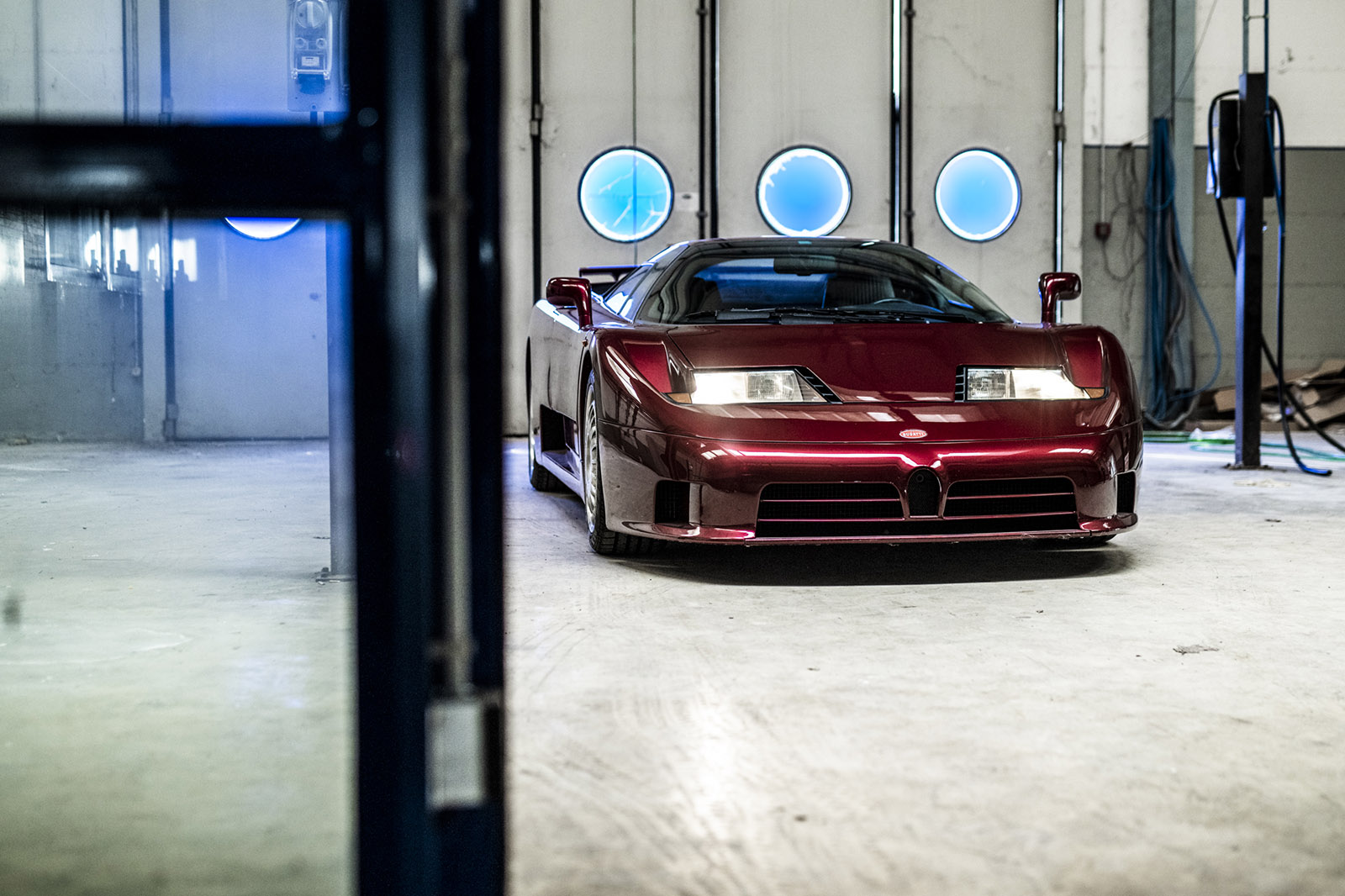 The supercar that started its era. The first rumors about the car began to circulate in 1989. The project was called with the number 035 and concerned a two-seater sports car characterized by a frame in aluminum honeycomb panels, rear engine with 12 cylinders in a 60° V supercharged, displacement of 3, 5-liter, all-wheel drive with 6-speed gearbox. The designer was Paolo Stanzani, a prominent engineer from Lamborghini, for whom he signed the Countach project. In 1990 the information got more and more detailed, also because Bugatti itself began to publish images of the mechanical parts: the engine, in aluminum and magnesium castings, would have 4 turbochargers, 4 overhead camshafts and 5 valves for each cylinder, “domesticated” power of 550 hp at 9,000 rpm and 53 kgm torque at 6,000 rpm. 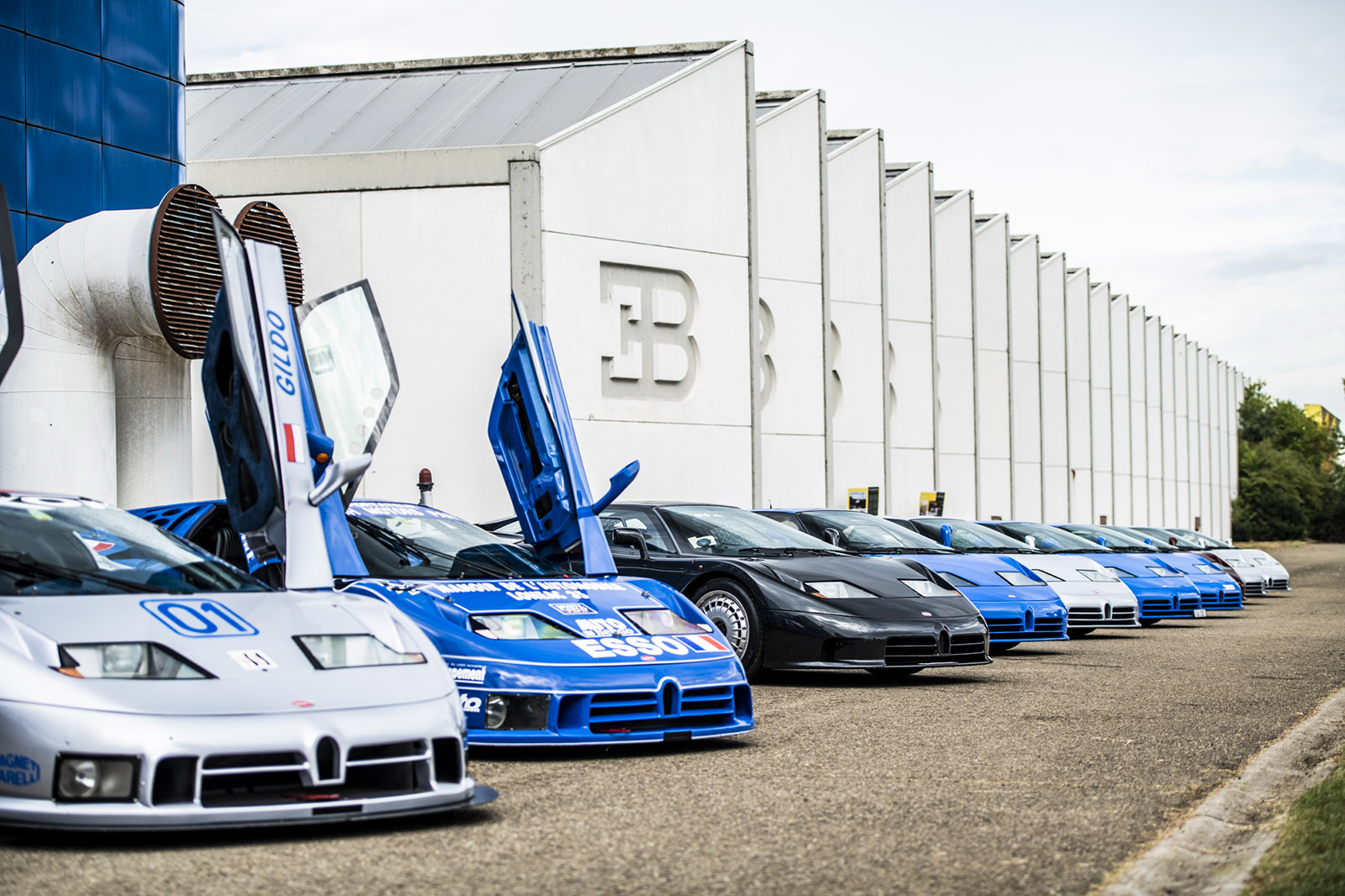 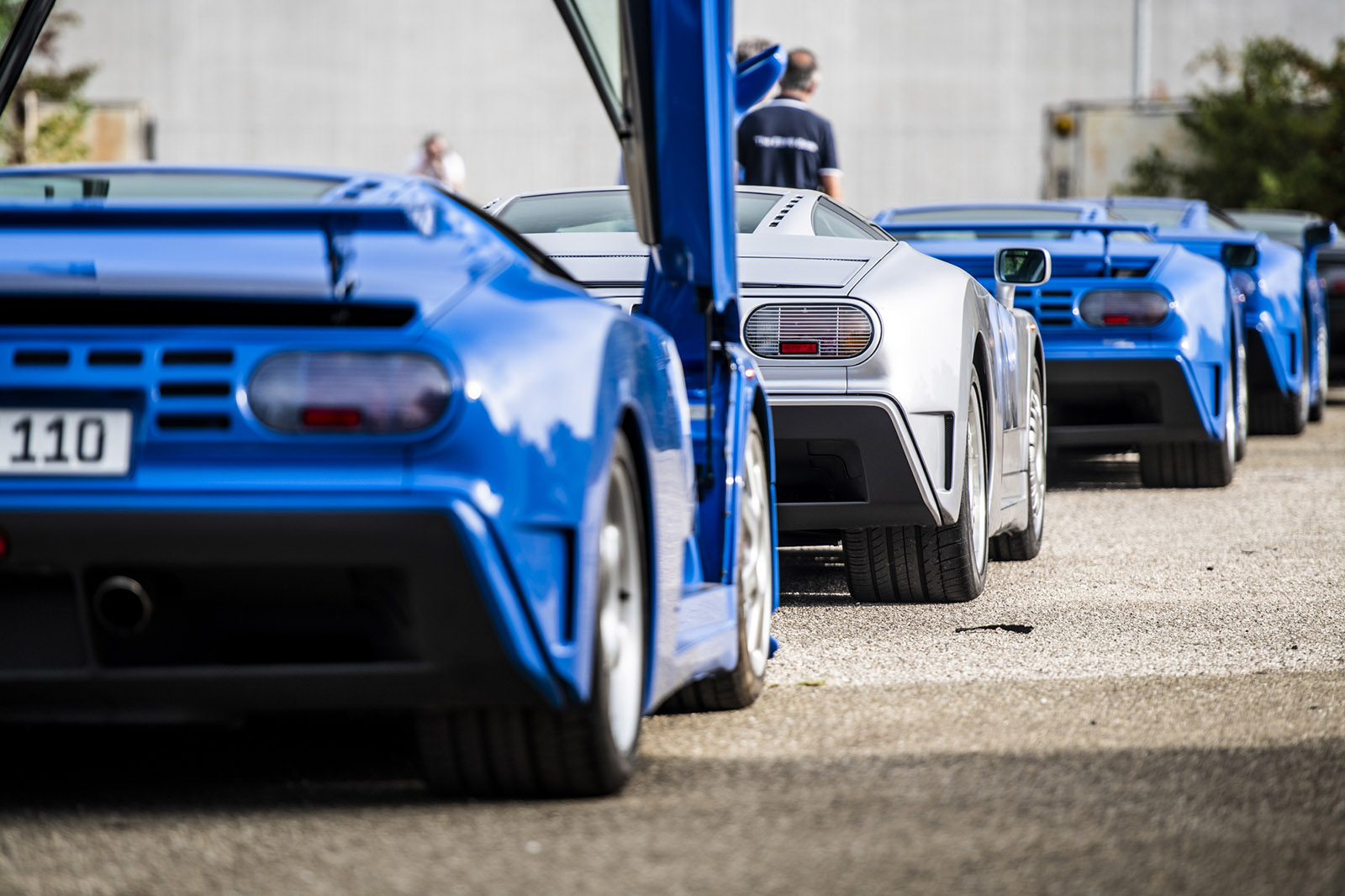 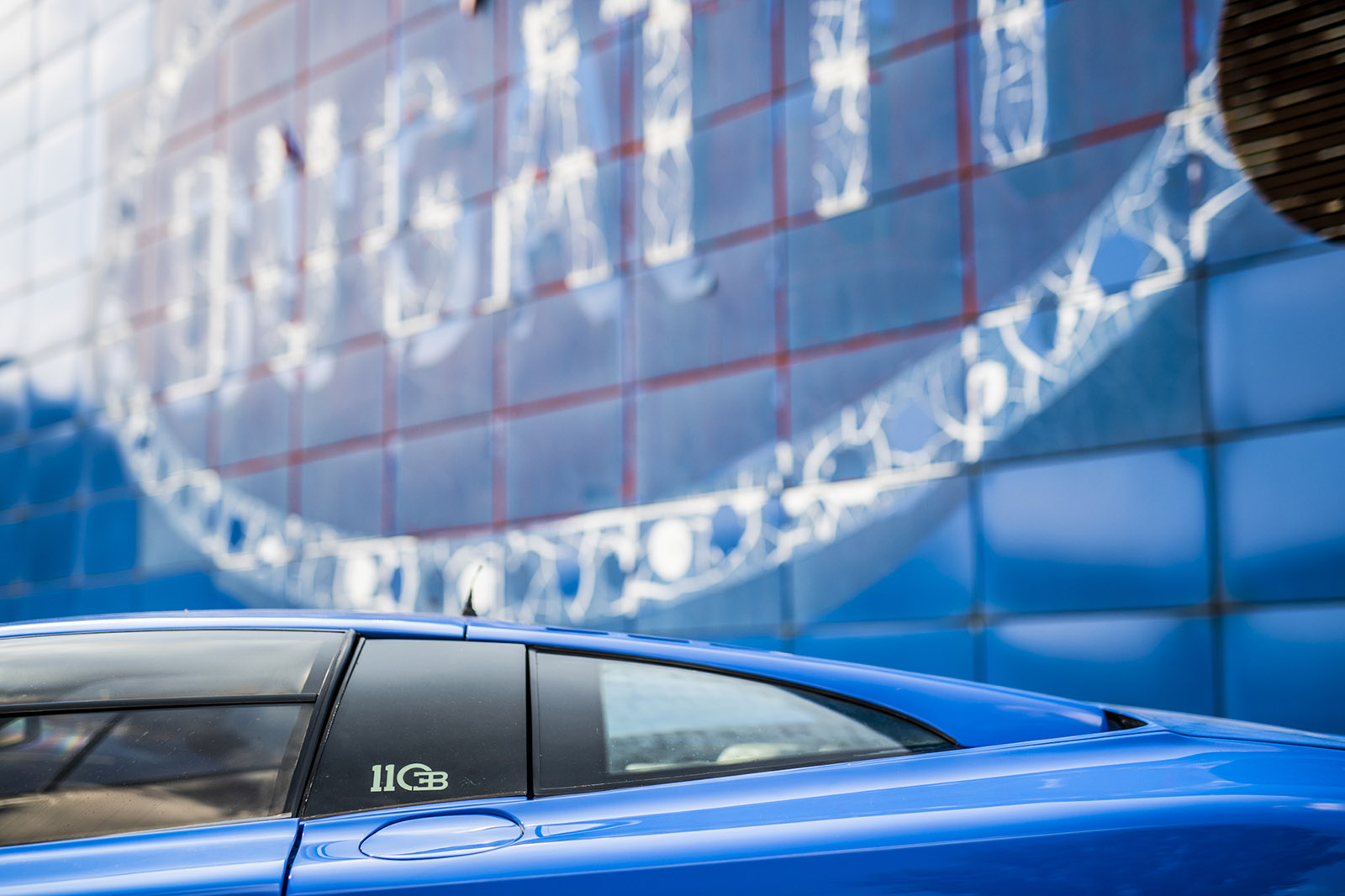 Street lightness. Among the characteristics of the supercar required to external designers, the shape of the body must be reminiscent of a fighter aircraft. The proposals of Bertone, Italdesign, Paolo Martin and Marcello Gandini were examined, providing the version closest to Artioli’s idea. And on August 23rd 1990, at 7 pm, the first prototype began to move around the Campogalliano plant. An Audi engineer was present to evaluate the transmission system adopted, in which the gearbox located on the side of the engine in the same block transfers the motion to the wheels using a central coupling for the distribution of the torque respectively 40 per cent at the front and 60 per cent one hundred at the rear, as in the Porsche Carrera 4. During the test, it emerges that an active suspension system – developed by Messier Bugatti – and a carbon fiber frame were already being evaluated, an authentic first among the cars homologated for the road use.

The Materazzi factor. Meanwhile, in July 1990, the engineer Stanzani had abandoned Bugatti due to conflicts with Artioli and was replaced by Nicola Materazzi. In the April 1991 issue of Quattroruote, the engineer from the South of Italy, who had already worked on several Ferrari projects at the time, including the F40, explained the development of the car and the use of the carbon fiber chassis produced by Aerospatiale which, due to the tub shape, sacrificed part of the car’s design but guaranteed a weight reduction of 20 percent, stiffening it by 250 percent compared to the original structure. Still on the cutting edge, the disc brakes were made of carbon fiber, while the car boasted a cx of 0.28. Gandini’s design was distinguished by the wedge shape, the faired underbody, a removable rear wing and two rear fans designed to evacuate the heat from the engine compartment. The performance of the more developed engine made it possible to maintain the original power of 550 CV but at 8,500 rpm, increasing the engine torque to 60 kgm at 4,500 rpm. The active suspensions had not yet been definitively approved, but in the meantime the tests continued with the press increasingly interested in this beast, which was light years ahead of the competition. It was a car that set out to be fast, safe, comfortable and beautiful. Basically, the business card that any car manufacturer would want for their creations. 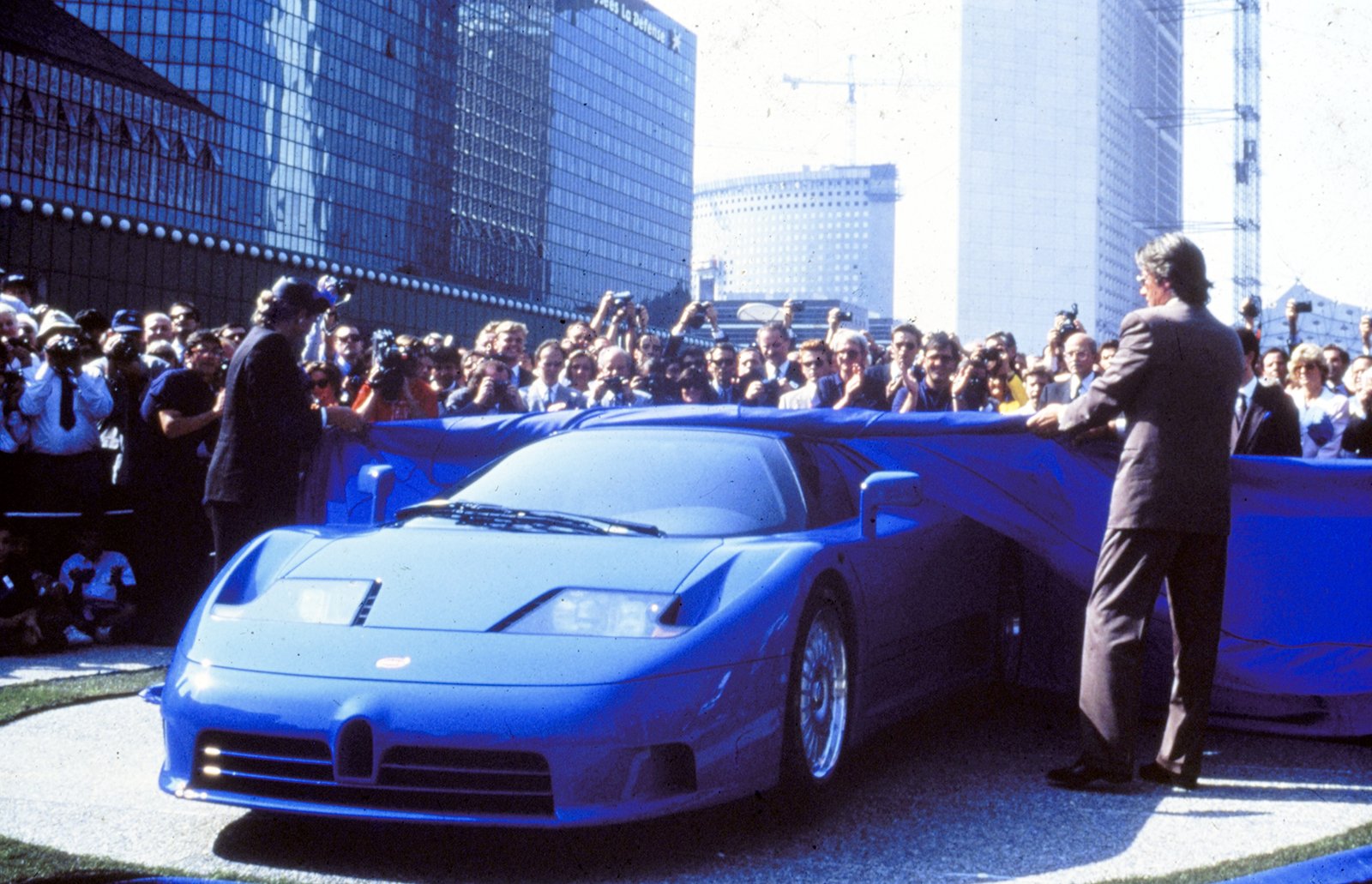 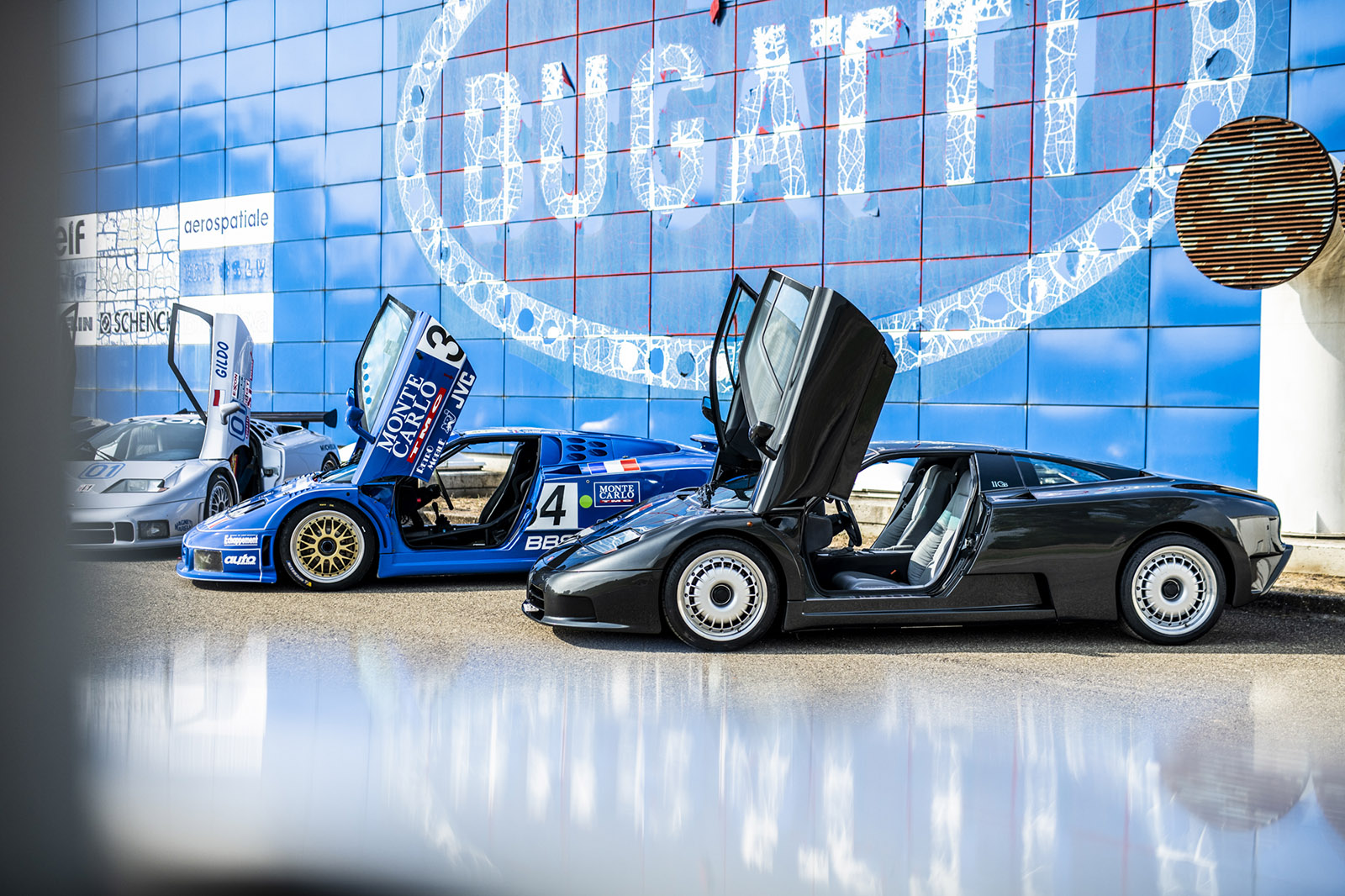 The results of the tests. The EB110 was tested at all latitudes to verify the perfect efficiency of the integral transmission. Tests with a 40 percent gradient with only winter tires, specifically developed by Michelin, demonstrated the balance and correct functionality of the distribution of the drive torque between the two axles. A sign that the original project was born healthy, thanks also to the contribution of an unknown visionary technician: Oliviero Pedrazzi, who indicated the solutions, leaving the engineers with the task of defining the necessary strength and materials. The rims were made by the German BBS and housed 18 “Michelin MXX3 tires: 245/40 with 9” front and 325/30 with 12 “rear. Finally, the design of the car, now close to presentation: Marcello Gandini absolutely did not intend to put his body to work, considering it to be correct and untouchable. Artioli, however, considered it too contemporary, not very futuristic and, above all, not very “Bugatti”. He then decided, faced with the immovability of the Turin master, to update the lines by combining them in the style of the Mulhouse house through the intervention of the architect Giampaolo Benedini, former author of the Bugatti factory in Campogalliano, as well as a gentleman driver and relative of Artioli. 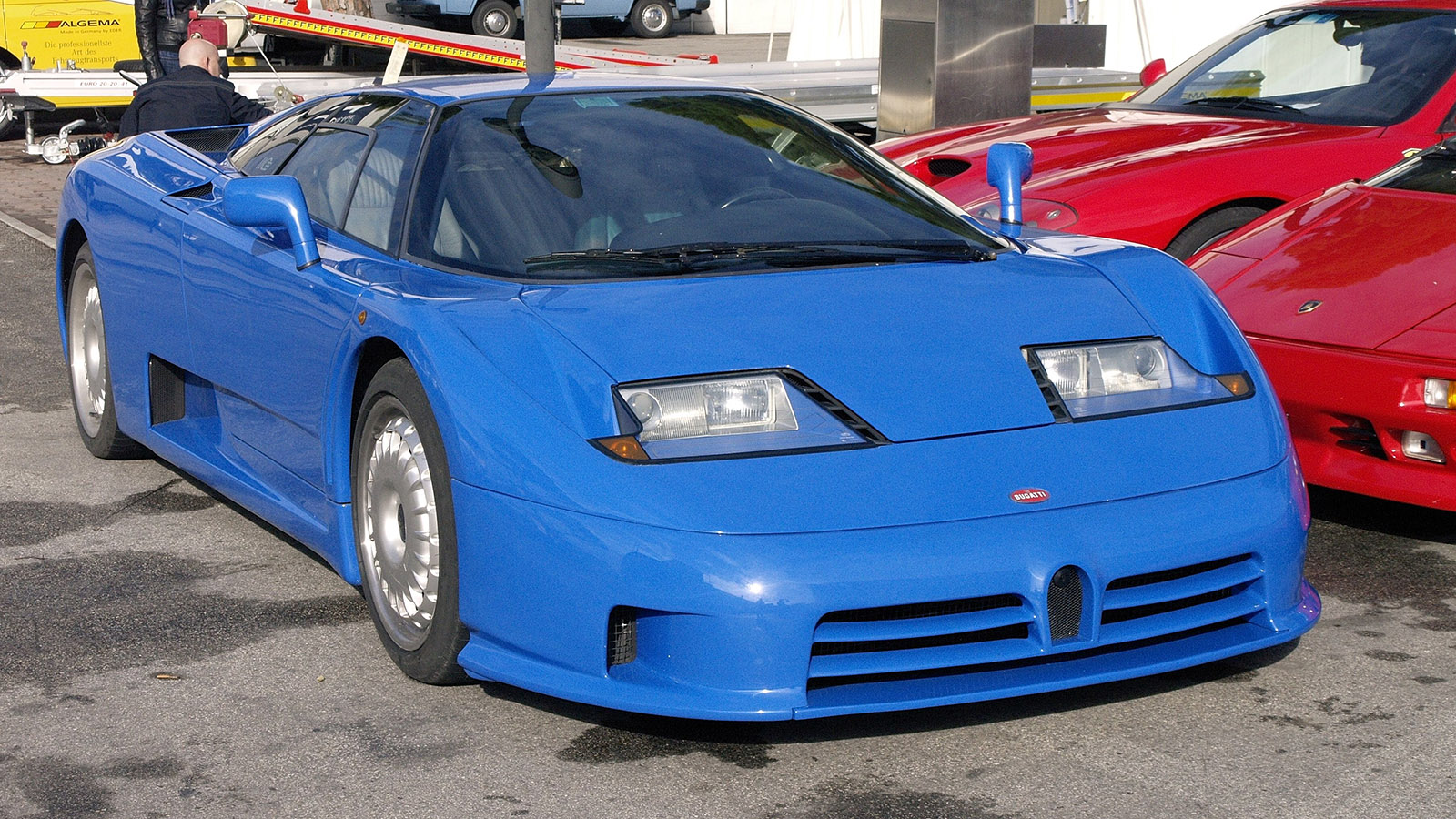 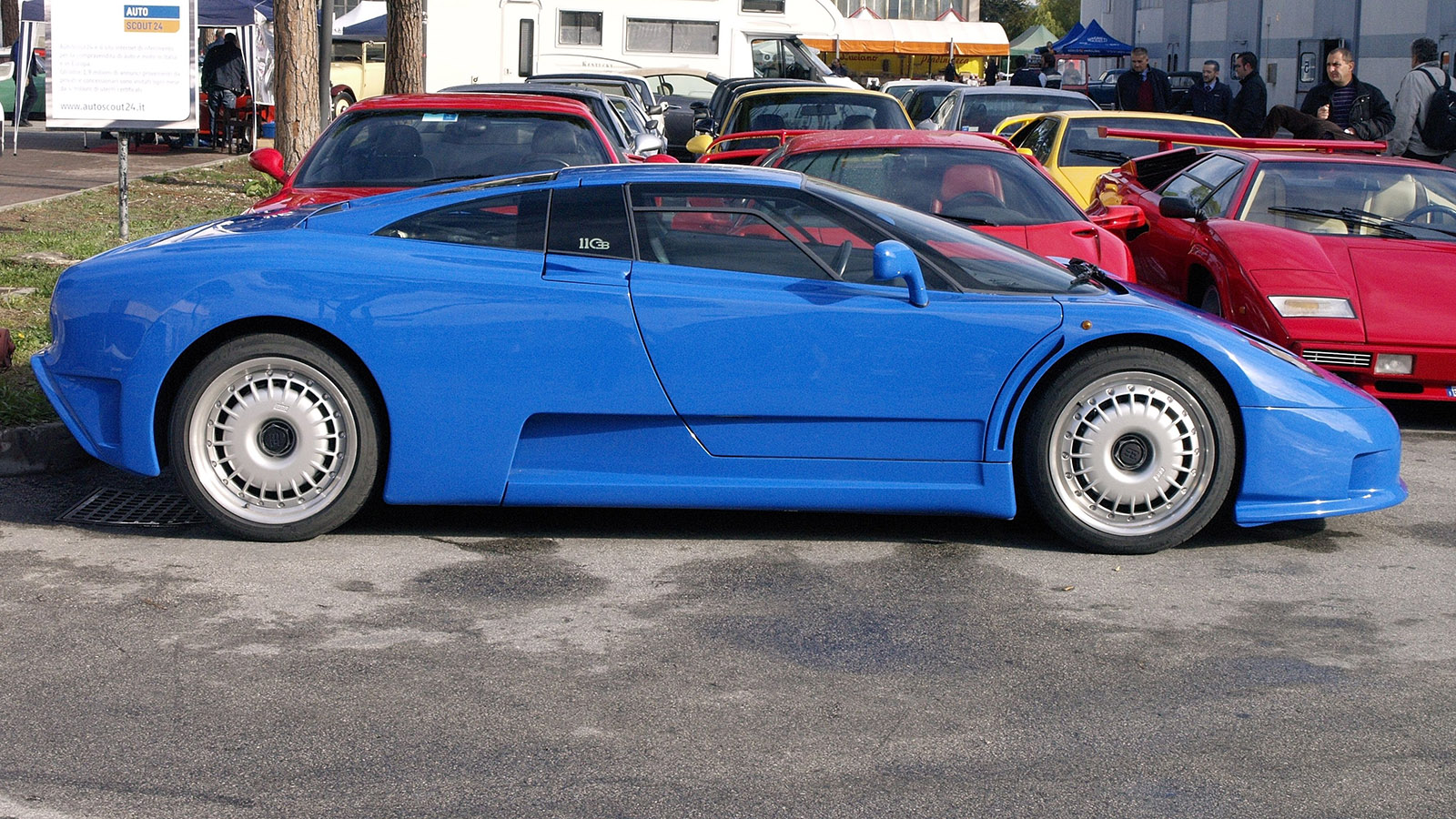 Vive la Marque! The architect inserted the stylized symbol of the brand (the famous horseshoe) on the upper portion of the front air intake and eliminated the retractable headlights so dear to Gandini, making them fixed in such a position as to illuminate the road well. He also softened the angular shapes according to the indications that emerged in the wind tunnel, thus making the bodywork more similar to the original Italdesign proposal. The rear wing automatically raised above the speed of 120 km / h and then returned to the rest position at 80 km / h. Access to the car was controlled by the handles inserted flush with the upper portion of the lower air intake, with the two doors that rotated forward and lifted, obtaining an aeronautical effect. The masterpiece was now ready: the interiors represented the maximum aesthetic-functional expression with the use of fine materials, namely leather and briar, and a pattern of horizontal lines on the carpet. While the same decoration was inverted 90 degrees on the seats, leg loops and headrests. The seats were electrically operated and were made by Poltrona Frau, while the audio system was developed by Nakamichi. An excited Alain Delon was the godfather at the Parisian presentation as the perfect testimonial of French charm and discretion for the newborn Bugatti. 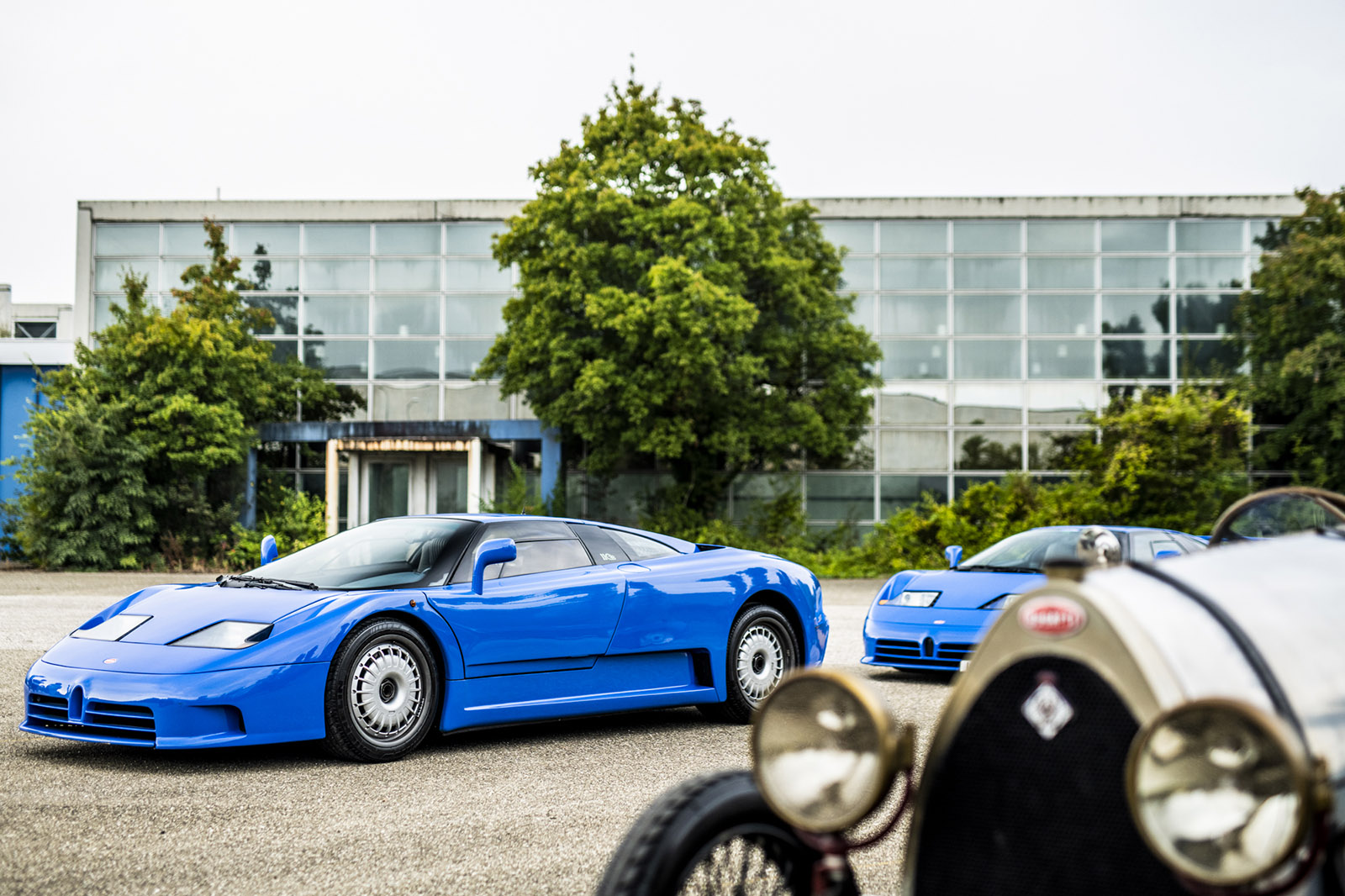 Glorious shipwreck. However, the adventure, born under the best auspices as the creation of the most avant-garde car in the world, was frozen within a few years by a market that turned out to be less rich than imagined. A bit like it had already happened for the Bugatti Royale, whose project was saved due to the providential need to build high-speed trains. The regret remains for the end of the Bugatti-Artioli adventure and the subsequent Bugatti-Piech adventure. On the other hand, it is not always possible to replicate the glories of the past. While the price with which the few existing Bugatti EB 110 GTs change ownership testifies to the never dormant admiration for a great dream.