The Boxer Lancia Club’s first gathering was a great success!

They bring to mind affairs that have marked the Italian history and send foreigners into raptures with their typically Italian appearance. They are the historical “gazelles”, the cars  of the carabinieri, now reunited by the G.A.S.A.P. of Pastrengo, near Verona

Preserving the carabinieri’s motoring heritage and enhancing the important role that motor vehicles have played for the Force since the 1930s. It is with this intention that, within the National Carabinieri Association of the Pastrengo (Verona) section, the G.A.S.A.P. – Gruppo Automoto Storico dell’Arma Pastrengo (Historic Automoto Group of the Weapon Pastrengo). Under the direction of the appointed section president Luca Gaiardelli and the honorary delegate Giuseppe Thellung of Courtelary, the group has been able to confirm its seriousness and commitment over time, and is increasingly seen as protagonist with its cars at official ceremonies of the Institution, at trade fairs, in events of historic motorsport, to exhibitions and charity initiatives throughout Italy. 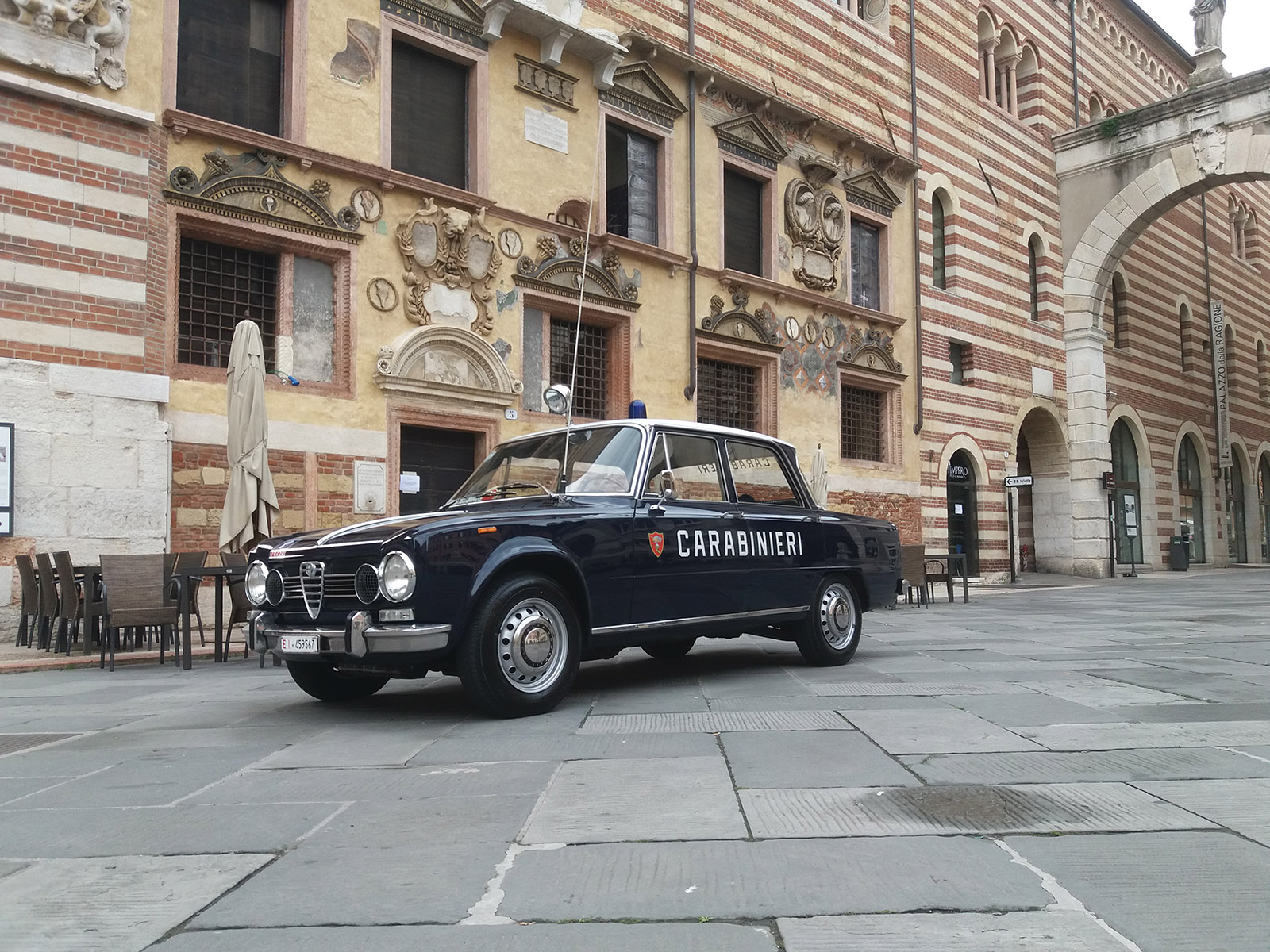 In total, the group has 20 vehicles, of which the oldest is a 1935 Fiat 508 C (Balilla Quattro Marce, 4 Gears). Each car represents its own sector of activity, related to the period of use. However, it must be said that, inevitably, not all are original: for some models it was necessary to resort to a reconstruction – with original material in disuse – and a restoration in order to be able to classify them as reminiscent. This is the case of the Alfa Romeo Giulia Berlina fitted to the Nucleo Radiomobile, which was built in 1972. In the weaponry, the Alfa Romeo Giulia debuted ten years earlier in the Giulia Berlina 1600 TI version with matte khaki green livery; among the most striking cases involving the model, many recall the arrest of Pietro Cavallero, the mastermind of the gang that in the 1960s carried out an impressive sequence of bank robberies between Milan and Turin. On board a Giulia of the carabinieri, the bandit was transported from the Novara area to the San Vittore prison one morning in 1967, between sudden accelerations and the scream of the so-called “Marellona” (“Big Marelli), the whistling siren of Magneti-Marelli asking for a way in the streets of the Lombard capital. It is a model, the Alfa Romeo Giulia, which also appears in the historic advertising campaigns of the carabinieri. And who doesn’t remember it in the detective films of the seventies? In 1965 the Giulia 1600 Super then entered service with a matte green livery, a color that, in 1969, became glossy fern green. From the beginning of 1972 this color was replaced by the blue livery with a white roof on which the word “carabinieri” appeared in capital letters, in white letters, along the sides. Some examples of the Giulia remained in service until the early 1980s and became the emblem of the Nucleo Radiomobile, later replaced by the Alfettas. In the Arma, the Giulia also performed escort services, cover services (owl cars) and other institutional duties, adopting the colors of series production. 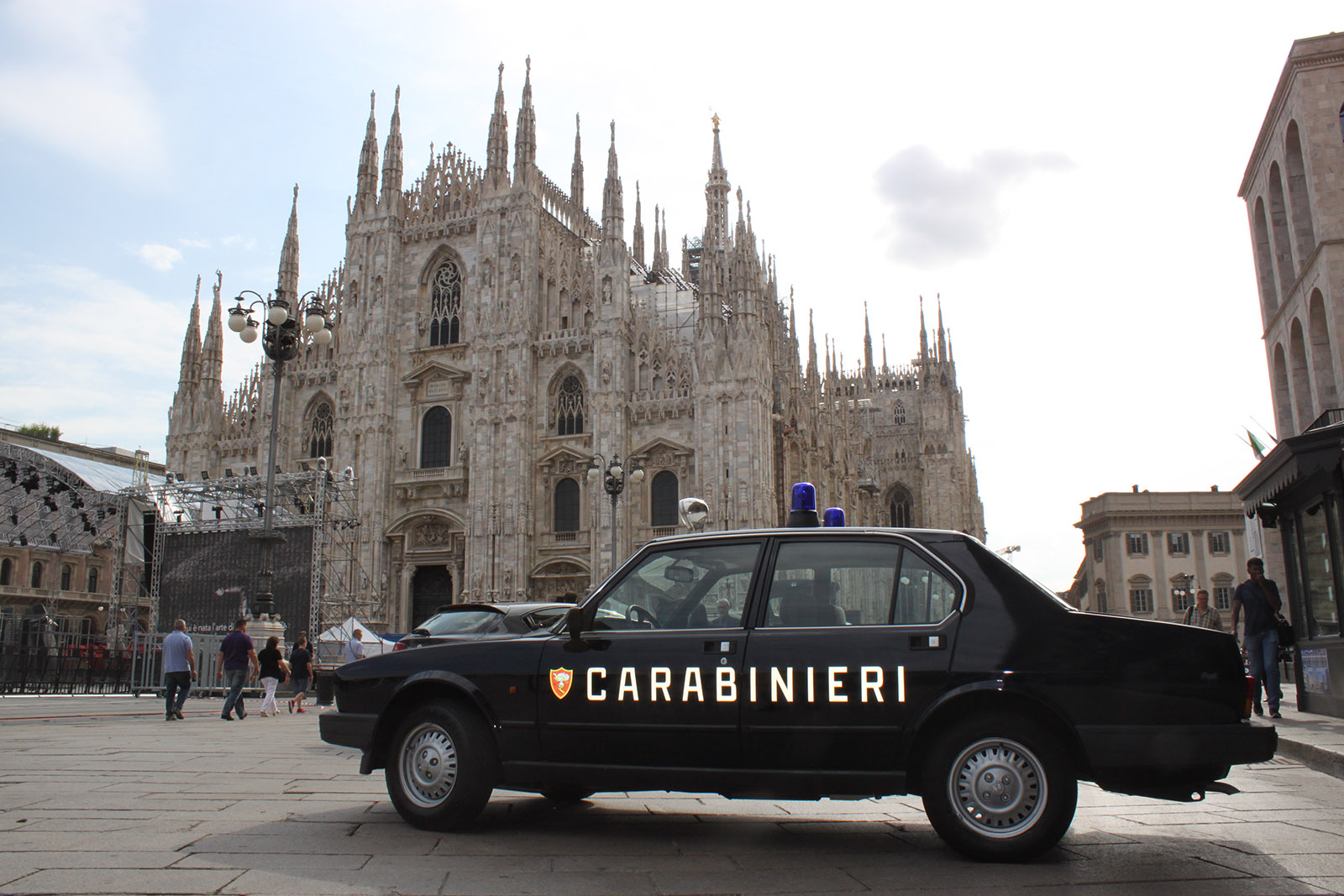 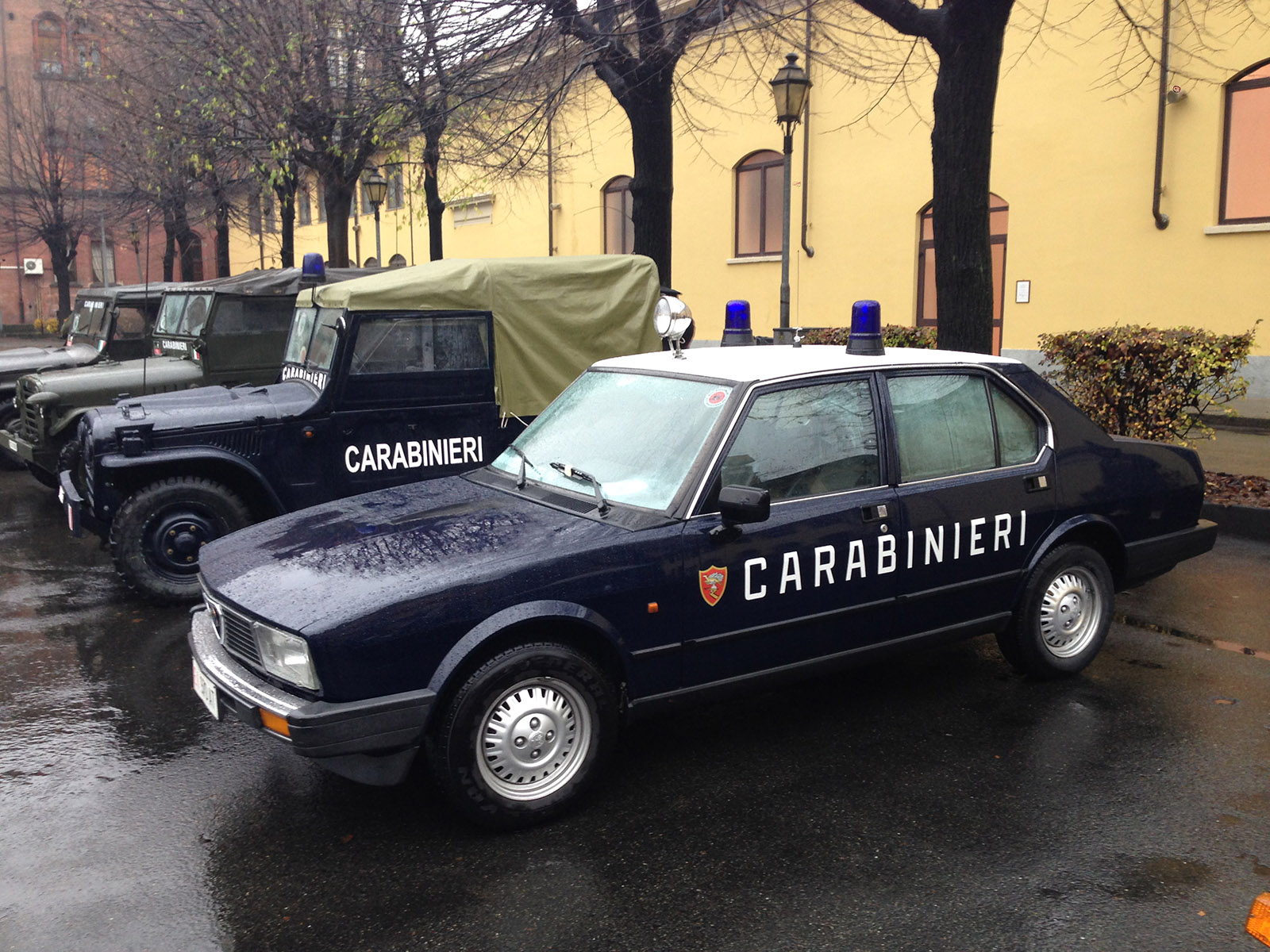 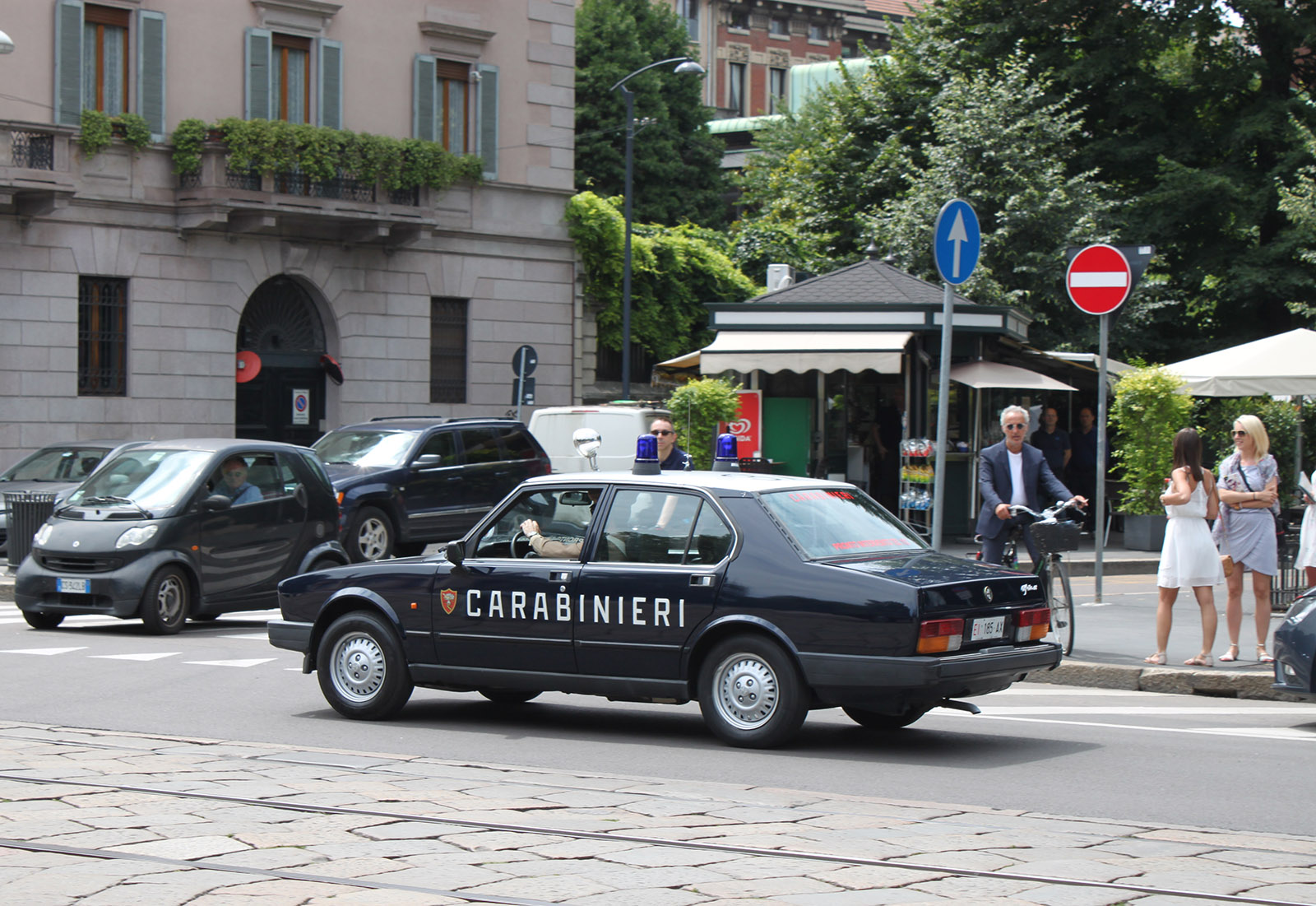 Alfa Romeo Alfetta. It was a very successful car in the Carabinieri. From 1972 it gradually replaced the Giulia and was the car of the Nucleo Radiomobile until the mid-1980s. Four series were used, again with a 1.8 (1779 cc.) Petrol engine. It was the car of the great patrols of Rome and Milan. The example present in the group is a re-evocative reconstruction of 1975 of the version with white livery for escort services. On the other hand, the 130 bhp 2000cc engines with armored glass were used to supply the magistrates and personalities. Judge Giovanni Falcone, during his travels through the streets of Palermo, used them all, from the second round lighthouse series to the square lighthouse. 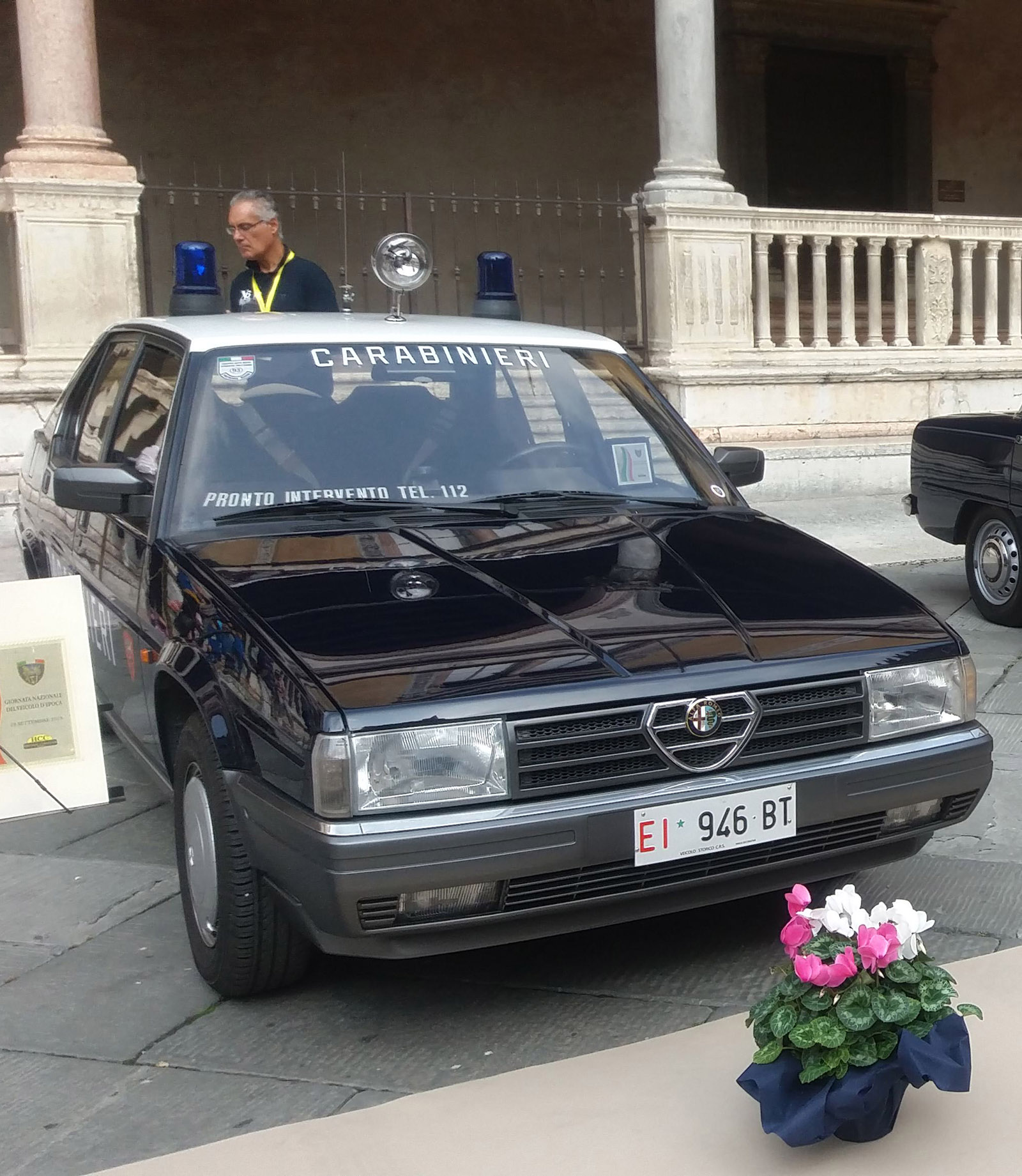 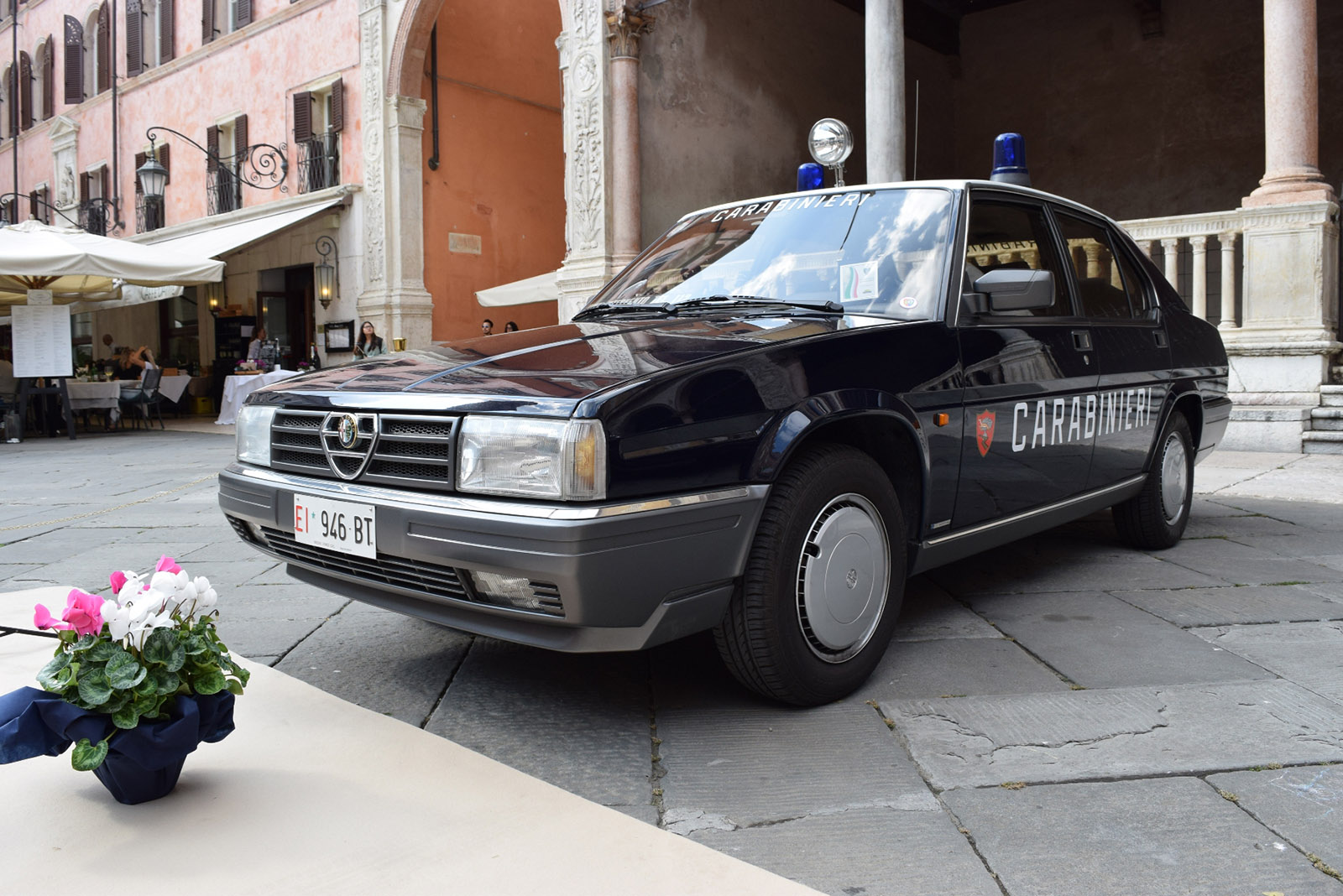 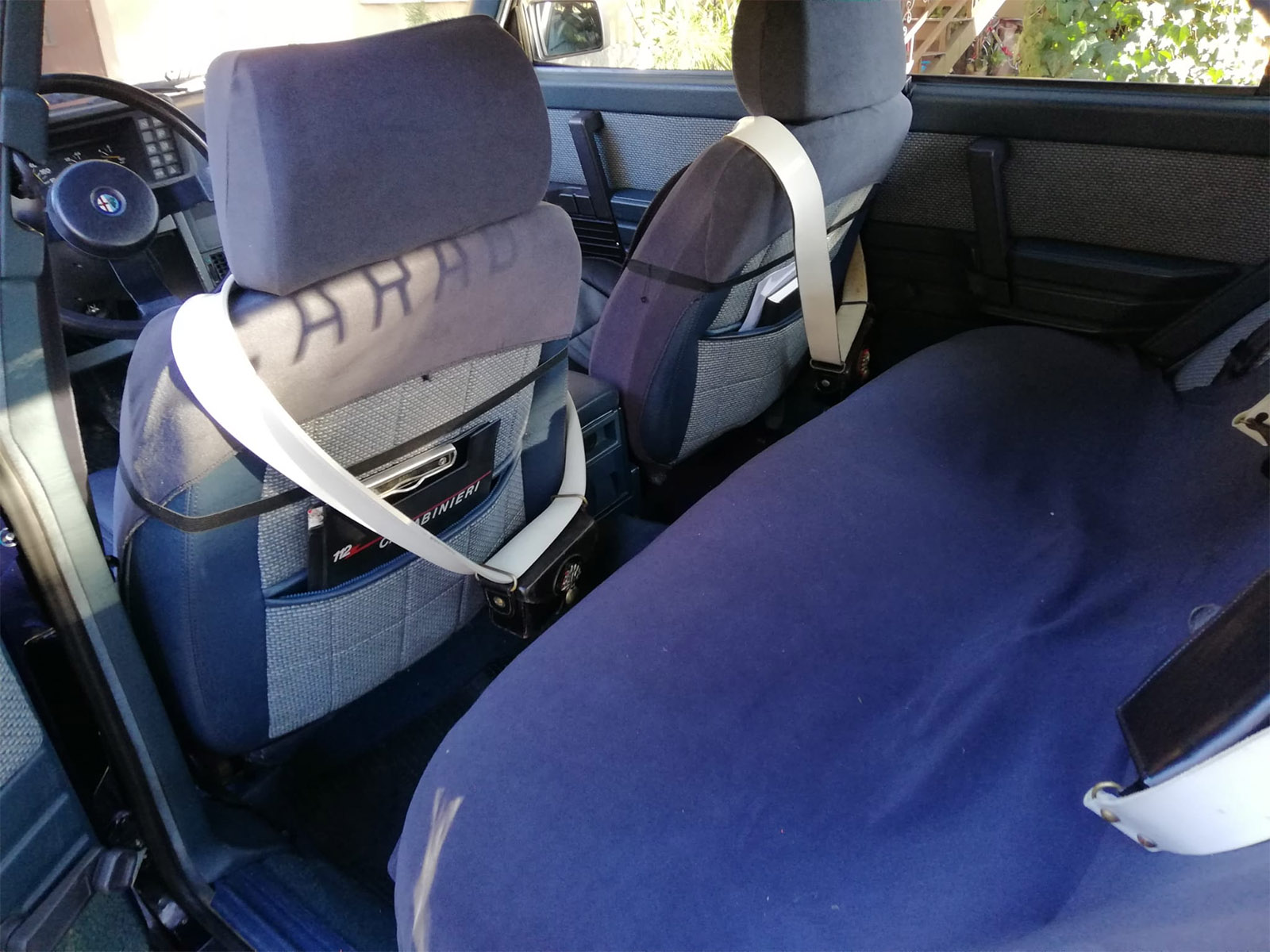 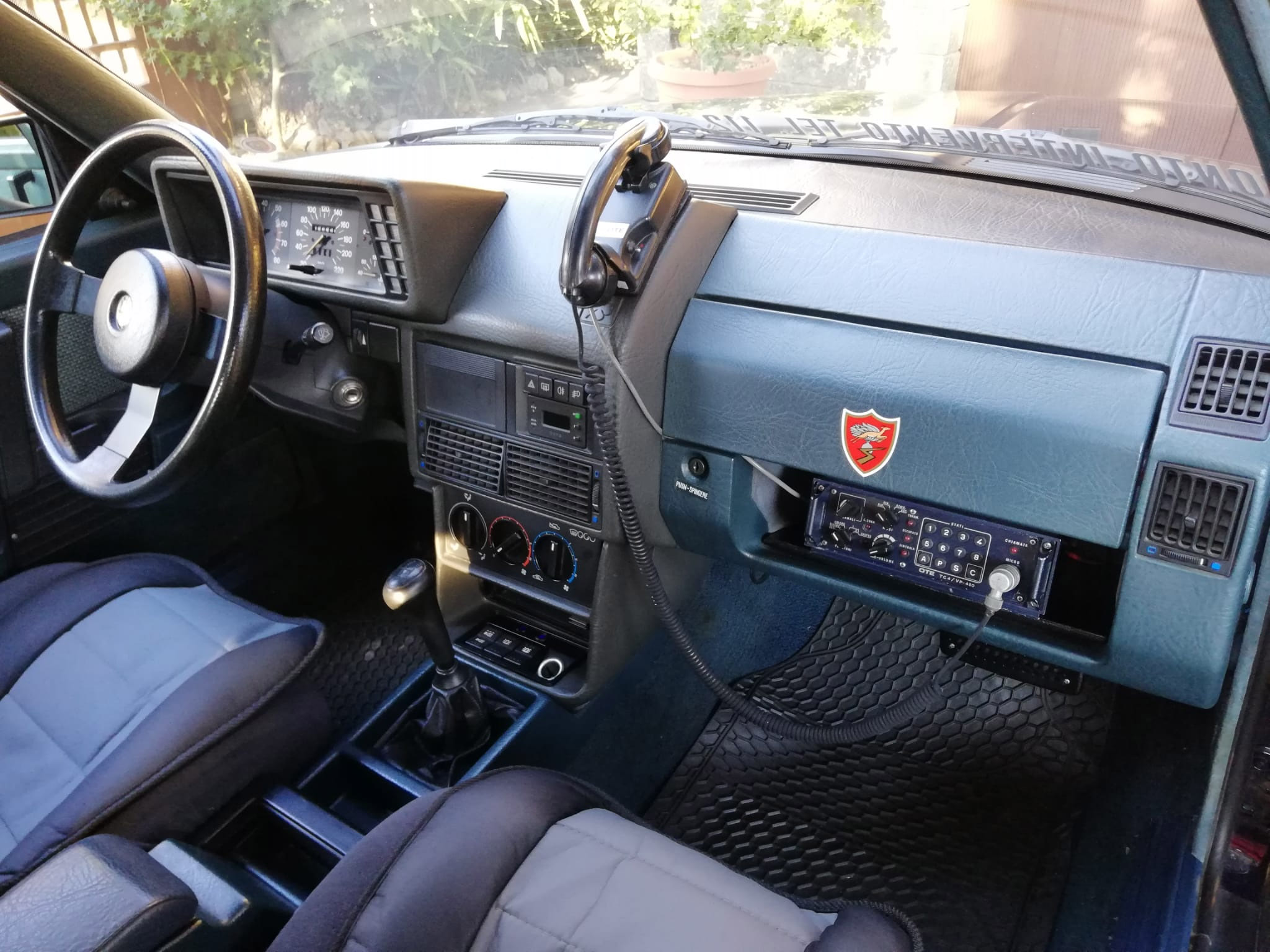 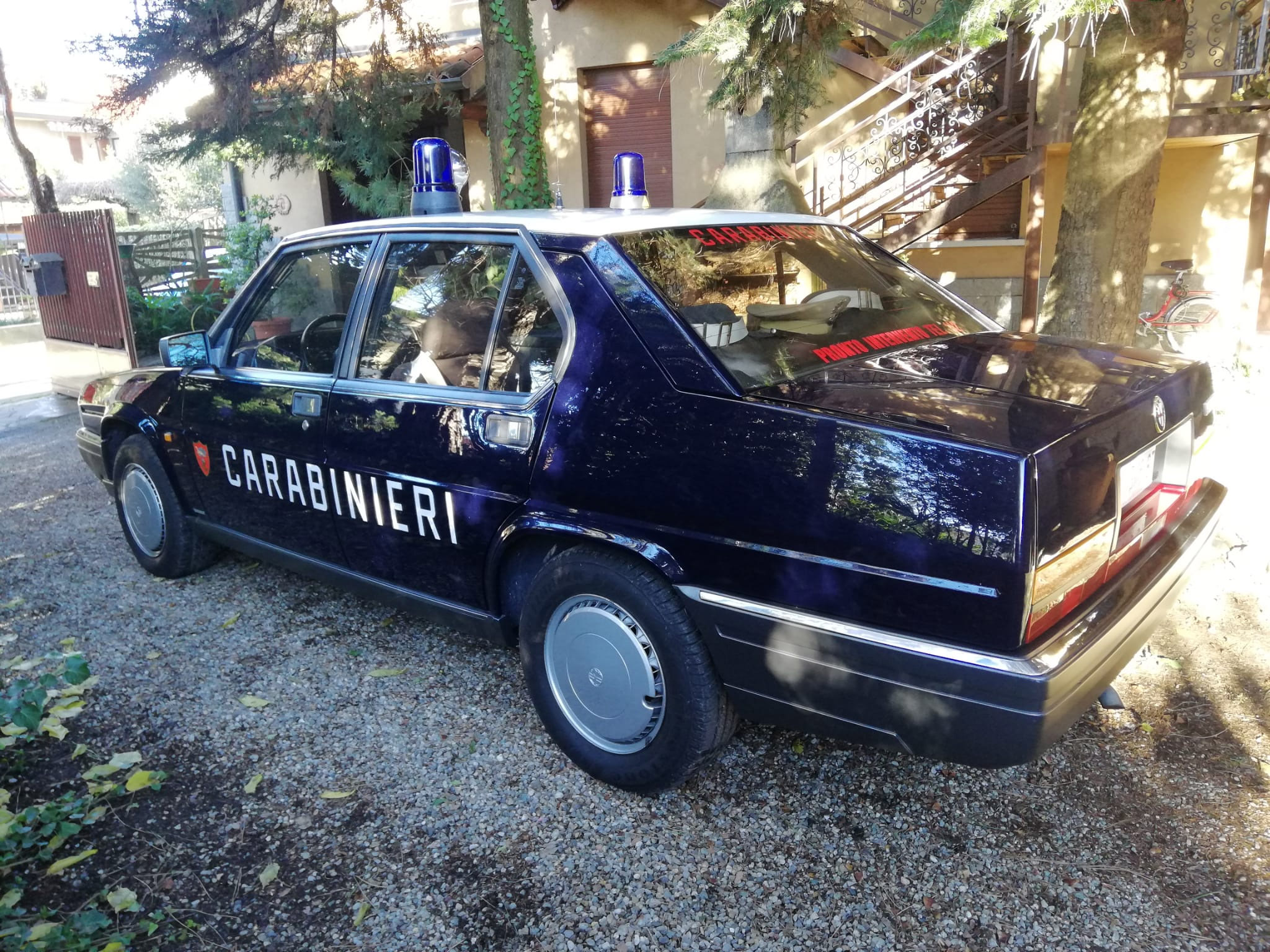 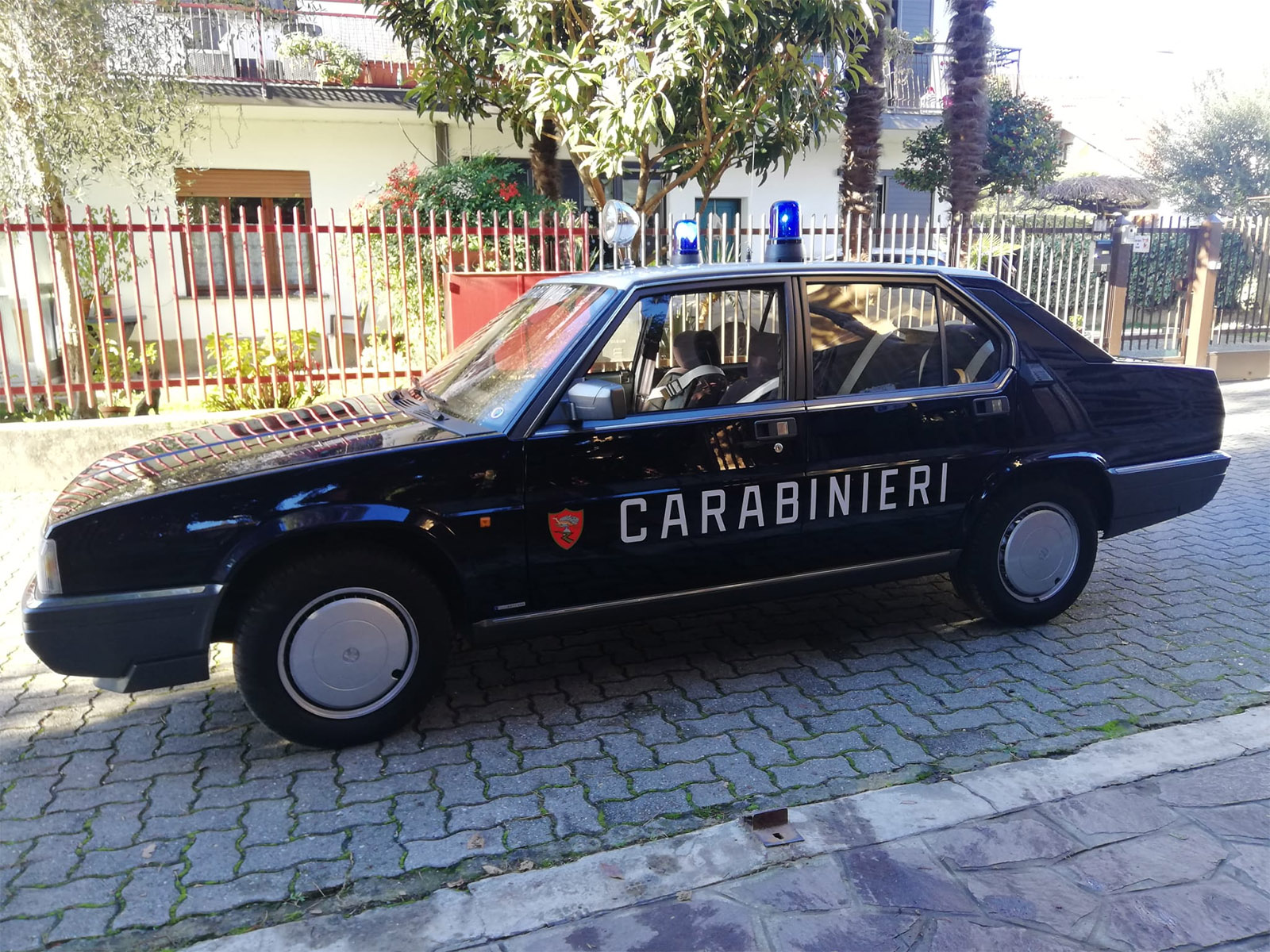 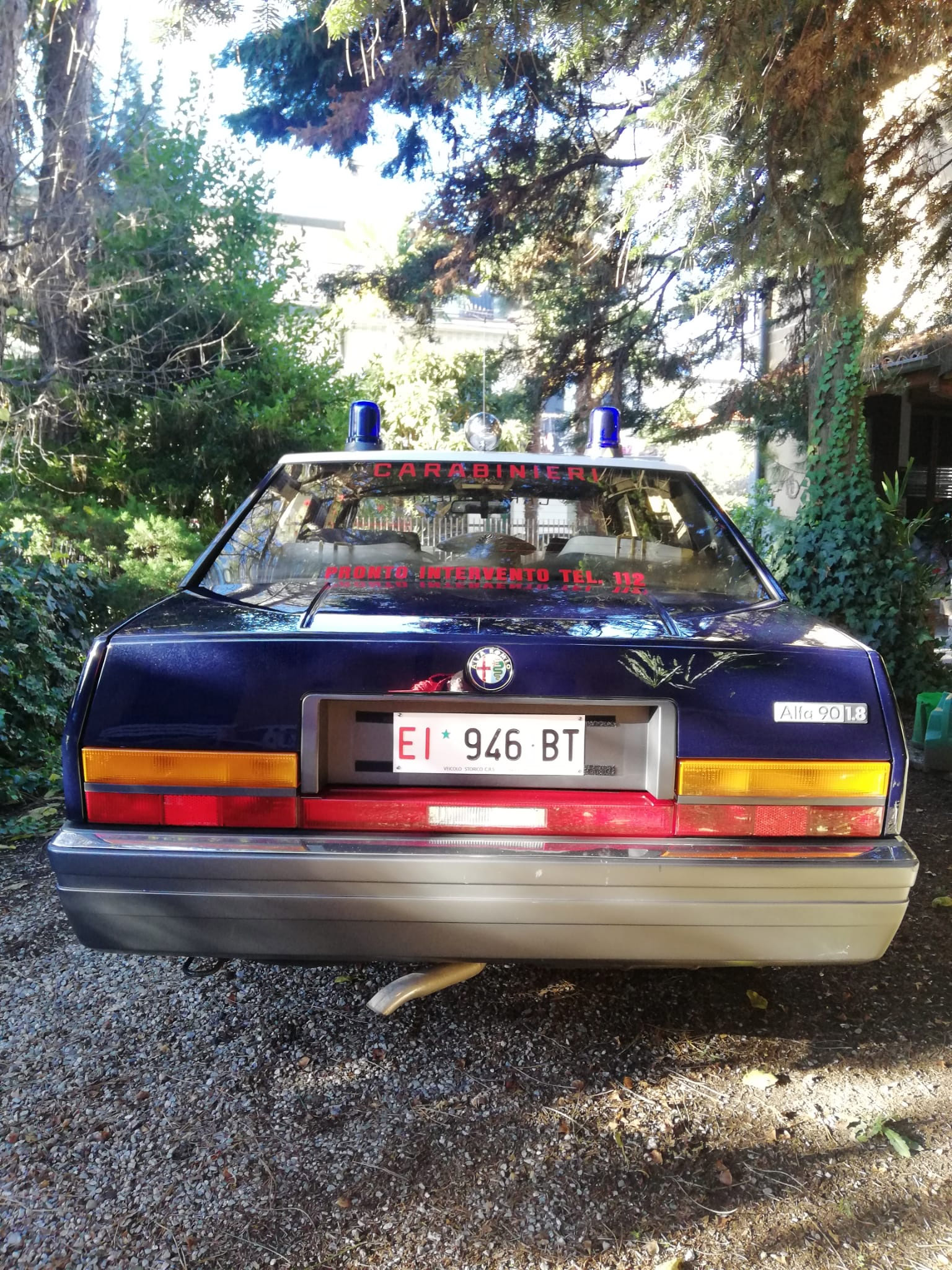 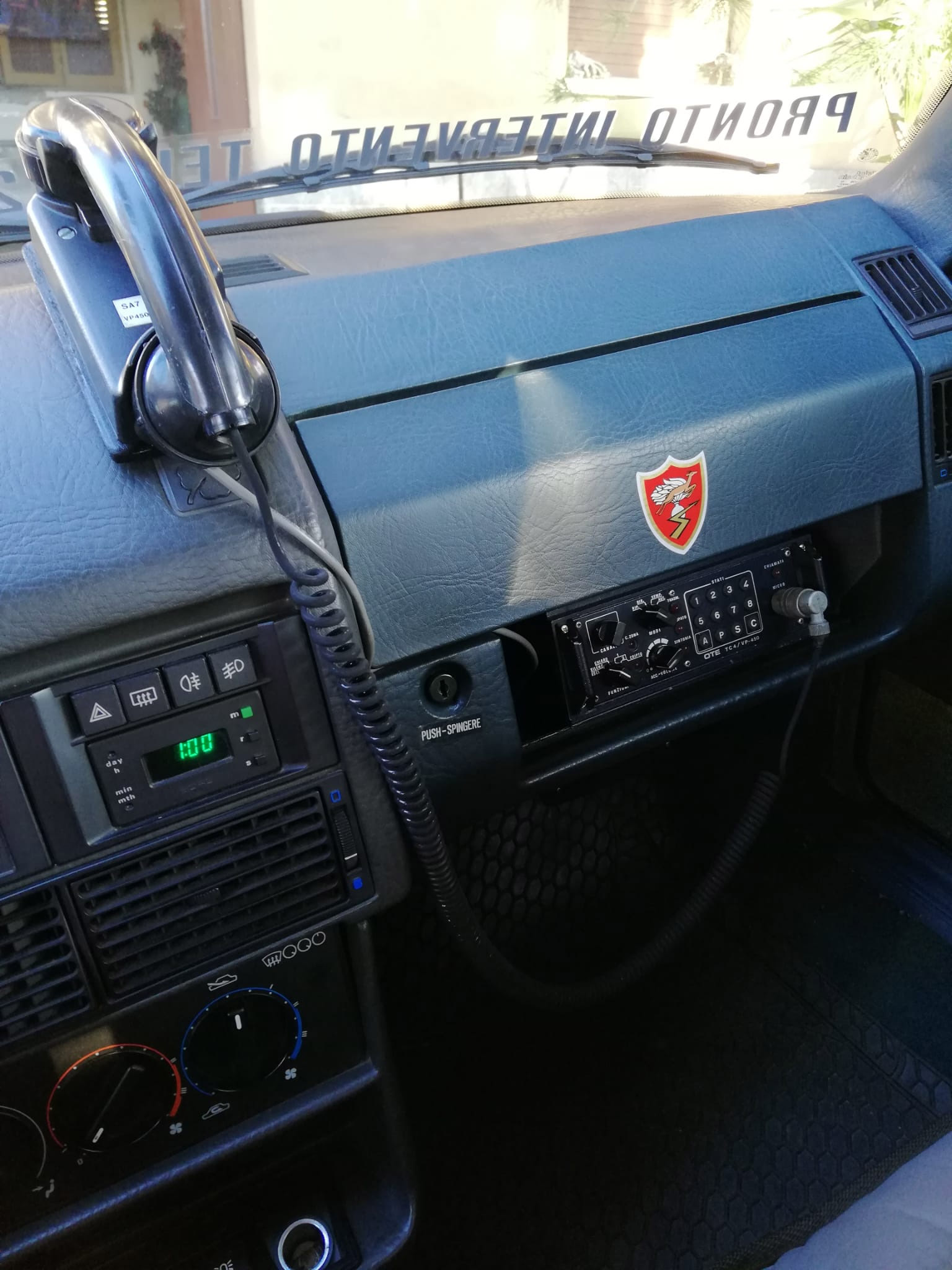 The Alfa 90. The Alfa Romeo Alfa 90 1.8 Berlina recalled the Alfetta bodywork line and in the Weapon it served in version 1.8 (1779 cc.) Initially in the basic set-up. Then the Super version was also used, from 1986, again with a 1779 cc engine. The example of the G.A.S.A.P. is a reconstruction of the model supplied to the carabinieri Radiomobile Nucleus. Year of manufacture: 1985. 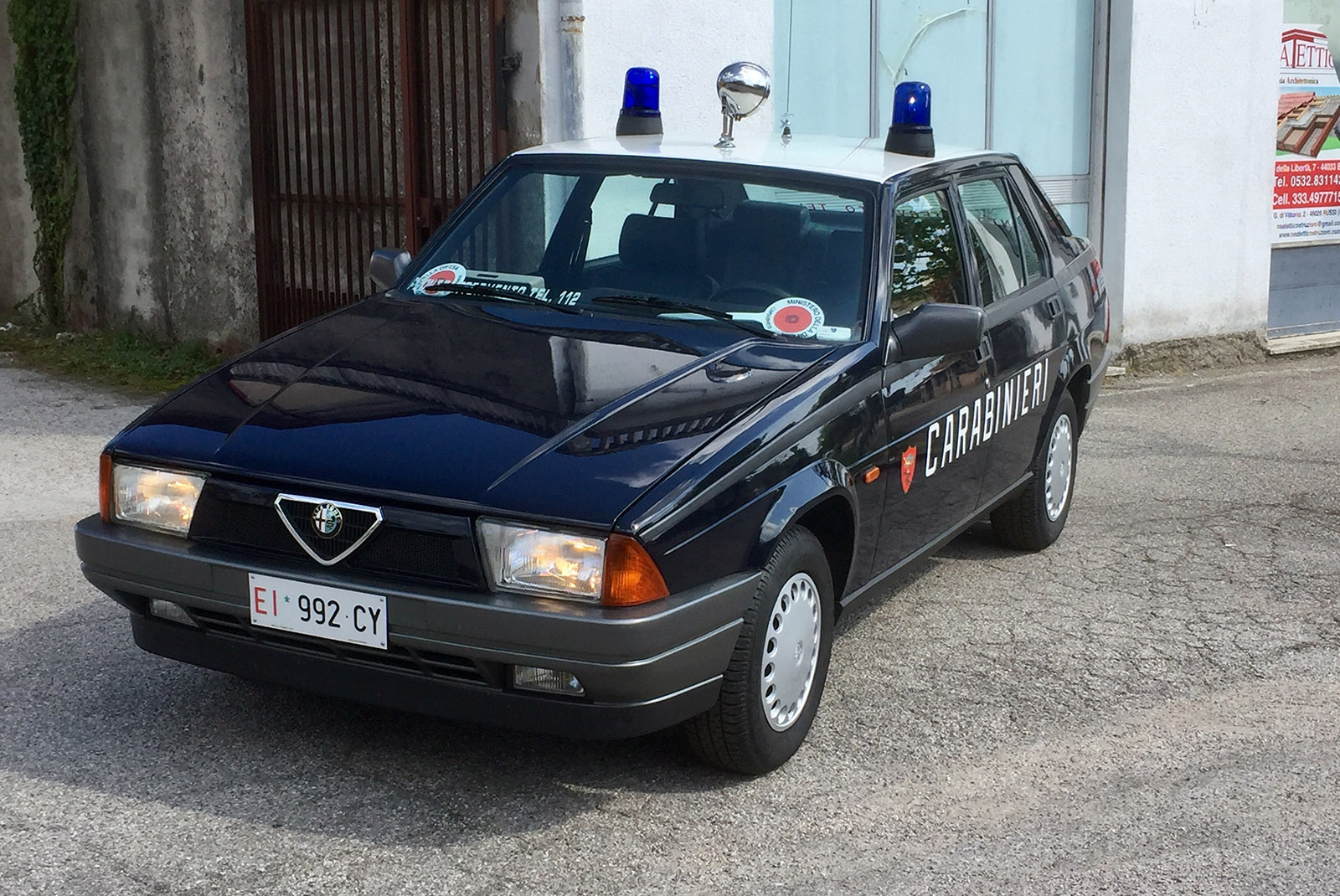 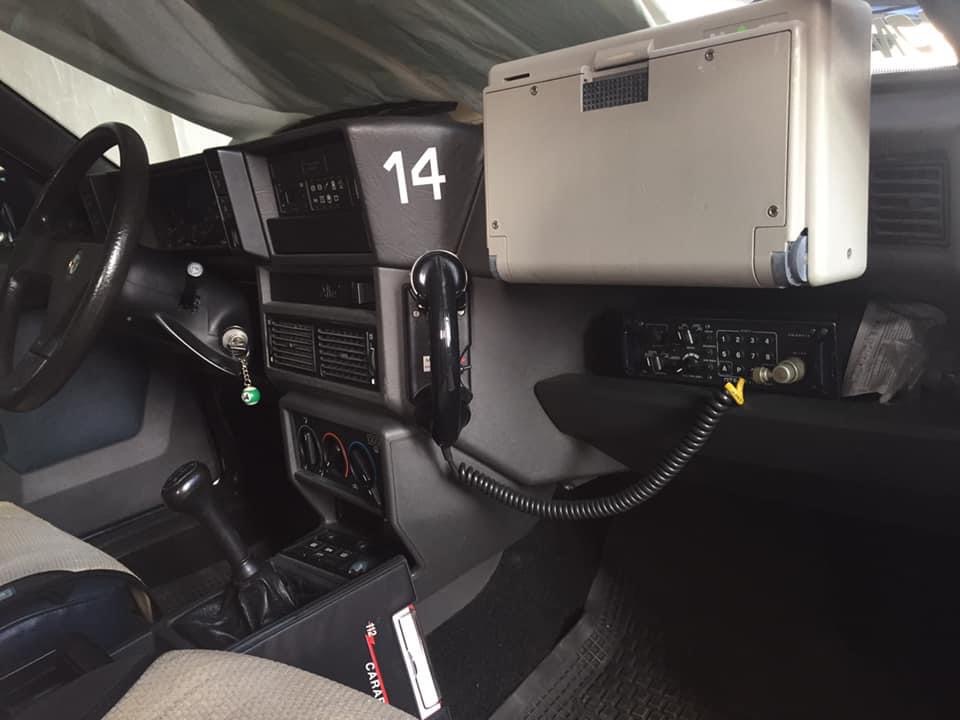 Alfa Romeo 75 1.8. Created to celebrate the 75th year of the Alfa Romeo in 1985, in the Carabinieri the Alfa 75 joined the last Alfetta fourth series and the Alfa 90 in the emergency service. For the Alfa 75 first series, the engine was expected to be 1779cc., Also used for the next version, the 1.8 IE (1988). The model was remarkably successful in the role of “gazzella” of the Radiomobile Nucleus and some examples remained in service in certain areas of the national territory for over a decade. The G.A.S.A.P. it has two Alfa Romeo 75s – from 1989 and 1990 – in the original version of the Nucleo Radiomobile. In addition to a reconstruction reminiscent of 1994 with 1.6 engine in the “cover car” version (owl car) with white livery. They were production cars that served in anti-terrorism and anti-drugs and were equipped with a mobile flashing light, two-tone siren, radio and other special equipment. 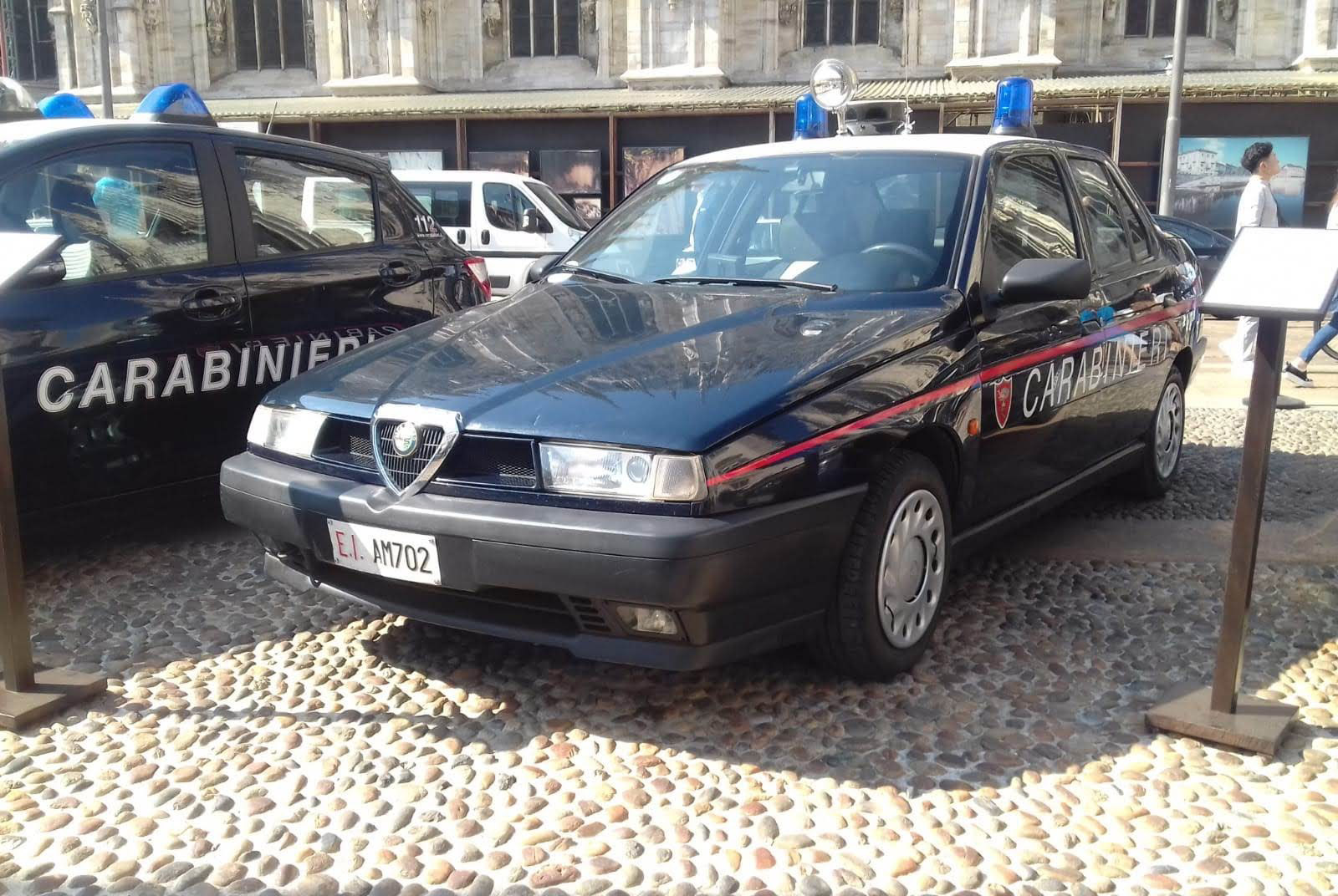 Alfa Romeo 155 1.8 Twin Spark. The G.A.S.A.P. counts among its favorites three Alfa Romeo 155s (of 1996 and 1997) in the original version of the Radiomobile Nucleo. Two of them are also equipped with an on-board laptop and a Falco license plate reading system. Capable of identifying suspicious cars or vehicles with non-compliant circulation documents, the Falco was the forerunner of the IT equipment that, increasingly refined over the years, now allows the crews of the “gazzella” to carry out their work with information in real time. Then, among the cars of this model, there is a reconstruction reminiscent of the 1994 Radiomobile version. The livery of the 155 provided along the waistline of the sides the presence of the red lightning bolt and in the final part the number “112” in white characters.

The great absentee, the Alfa Romeo 156. Released in 1997, the 156 entered service in the carabinieri Nucleo Radiomobile from the beginning of its production with the novelty of the engine: no longer 1.8 but the 2.0iTwin Spark 16V cat (1970cc). But the new engine was not the only novelty of the gazelle, in fact, on the roof of the vehicle, new blue rotating beacon lights appeared encapsulated in an anti-breakage protection, the same protection that was applied to the swinging orientation light. In addition, a new digital variable message light panel was mounted at the end of the roof. The livery was always in white / blue but the “112” logo, in white characters, was superimposed on the red lightning bolt. The Alfa Romeo 156 was one of the last cars to be licensed “E.I.” and one of the first to receive the new “CC” plate at the end of the year 2000, when the weapon became the Fifth Armed Force of the Italian Republic. At the end of the nineties, however, a number of 156 1.8i Twin Spark 16V cat. with “Blu Arma” livery in the Command version, intended for senior officers. Due to the regulations in force, this model cannot be included in the G.A.S.A.P. for two reasons: one is that the 156 “gazelle” is equipped with an armored front windshield and this feature means that the vehicle must be scrapped at the end of its career. The other reason is that the Alfa Romeo 156 “gazelle” is still too recent to be considered historical-reminiscent.

Fresh air with the Alfa Romeo 159. The model entered the carabinieri’s organization fleet as early as 2005, the year of its presentation, with widespread use in the Radio Mobile Units. As for the 156, of which the 159 is the natural heir, also for this model the leaders of the carabinieri force chose a new engine, which was also unprecedented for the Emergency Response cars: diesel, 2.4 JTDm with 5 cylinders in line, displacement of 2387cc. The set-up also featured innovations: new blue LEDs appeared on the roof and the swiveling orientation beacon was of new dimensions such as the identification number. Even the Alfa Romeo 159, which currently in the collection of the G.A.S.A.P. another absent – for the same reasons as the 156 mentioned above – mounts the variable message luminous panel. In the final parts of the sides, the “112” logo and the site header appear, in white characters, positioned above the new lightning bolt line that ends on the front hood.

The G.A.S.A.P. he is also on Facebook with a page that is always updated on the activities of the organization.