Among the production sports cars it was the fastest German of its time and the first to be equipped with front and rear spoilers. A peculiarity for which it is nicknamed “duck tail”

The development of the 911 Carrera RS 2.7 began around fifty years ago. “The 911 Carrera RS 2.7 was conceived as a special homologation car. It had to be a very light and fast sports car,” recalls Peter Falk, who was then responsible for testing series cars at the manufacturer in Zuffenhausen. Although the model variant was based on the 911, it ended up becoming the new entry-level car for competitions and rallies, featuring numerous technical innovations. The most performing model of the first generation of the 911 was the first 911 to be christened “Carrera”, the flagship of the Porsche range, the result of intense work done on elements such as weight, aerodynamics, engine and chassis. About 15 engineers have been developing the car since May 1972, plus production staff.

An unexpected success. Initially, the German manufacturer had planned to build 500 examples of the car in order to homologate the 911 Carrera RS 2.7 among the cars of the Group 4 Special GT. It thus became an approved vehicle for road circulation aimed at customers who also wanted to participate in races. On 5 October 1972, the new model was presented at the Paris Motor Show, at Porte de Versailles. By the end of November, all 500 were sold. Porsche even managed to triple sales volumes by July 1973. A total of 1,580 units were built and, once the thousandth car was produced, the Porsche 911 Carrera RS 2.7 obtained approval for Group 3 and Group 4. The M471 optional equipment package prompted the brand to build 200 lightweight “Sport” versions. Subsequently, another 55 units of the racing version, 17 base vehicles and 1,308 touring versions (M472) were built. 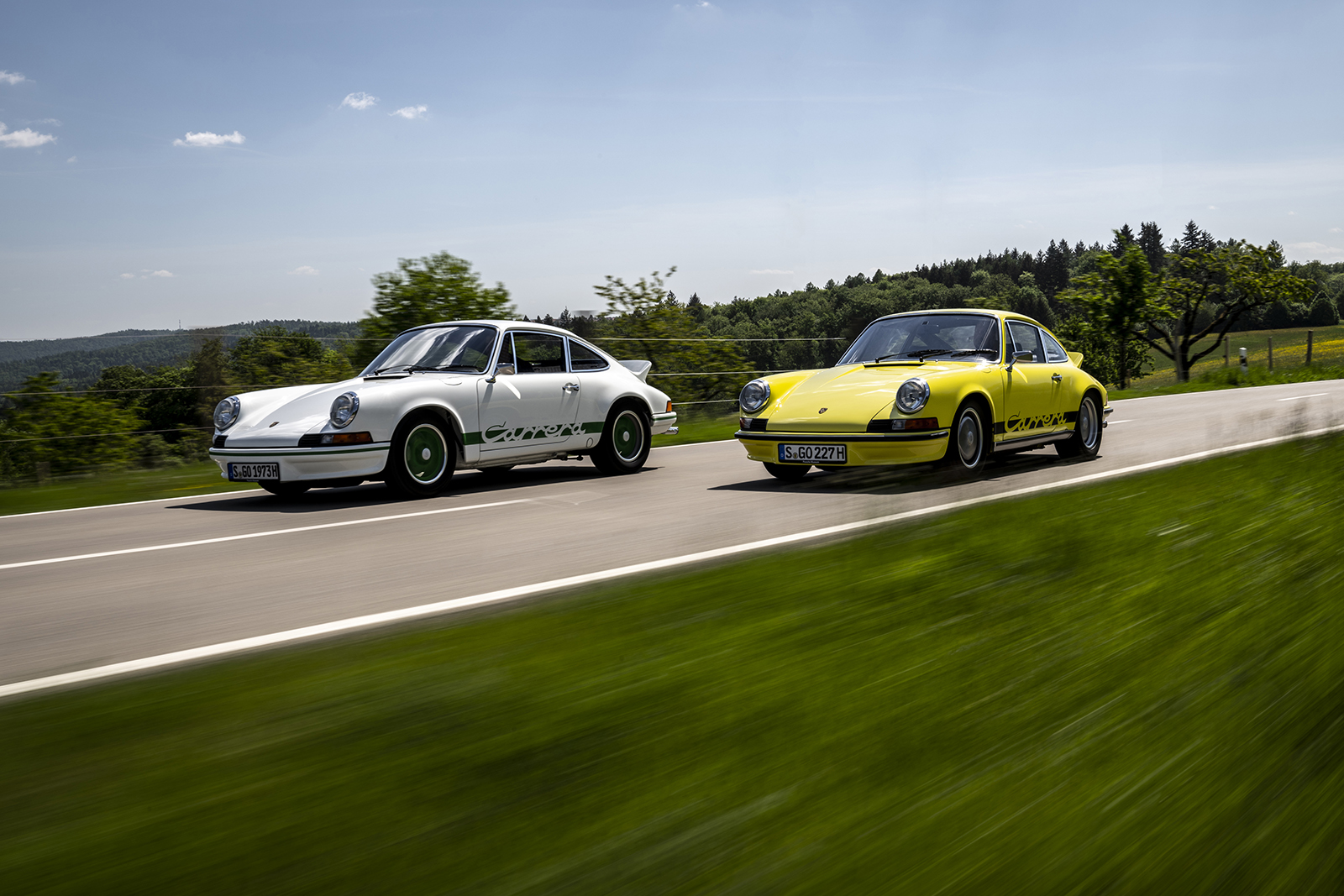 Glued to the ground. The bodywork was entirely geared towards weight reduction. Thin sheets, thin crystals, plastic parts and the elimination of insulation helped to reduce the total weight of the racing cars below the 900 kg required for homologation of the new model. At the same time, aerodynamics were improved. The goal was to minimize lift on the front and rear axles at high speeds to ensure more neutral handling. For the first time, engineers Hermann Burst and Tilman Brodbeck, together with designer Rolf Wiener, made a rear spoiler, tested in the wind tunnel and on test tracks. The rise of the new duck tail pushed the 911 Carrera RS 2.7 closer to the ground when driven at high speed and provided additional cooling air to the rear engine. This effect was achieved without any increase in aerodynamic drag, but even by increasing the top speed by 4.5 km / h.

Traction brought to the maximum. The engineers also got to work on the chassis. By this time, Porsche had already experienced racing with wider rear wheels, so the development engineers also tested this solution on the 911 Carrera RS 2.7. “We wanted to improve traction and handling by using wide tires on the rear axle, because that’s where the most weight is,” recalls Peter Falk. For the first time at the manufacturer in Zuffenhausen, a production car was fitted with tires of different sizes on the front and rear axles. For the front axle, 6 J × 15 forged Fuchs wheels with 185/70 VR-15 tires were chosen, for the rear 7 J × 15 wheels with 215/60 VR-15 tires. To be able to fit them, the bodywork has been widened by 42 mm at the rear, near the wheel arches. “Once it was verified that the system worked in development, production and sales, this combination was adopted for all subsequent models.”

Gilles Villeneuve, “the Aviator” flew away forty years ago

The first competitive successes. With the change in the regulations for sports prototypes, which prevented further development due to the new three-liter displacement limit, Porsche closed an era of great success. After the debut in competition of a 911 Carrera RSR (racing-sport-racing) with a significantly enlarged body at the Tour de Corse in November 1972, in 1973 the car manufacturer decided to start a new chapter in the 911 success story. In February of that year, an RSR driven by Peter Gregg and Hurley Haywood crossed the finish line of the Daytona 24 Hours with a 22-lap lead: a brilliant start to the new season. Herbert Müller and Gijs van Lennep won the Targa Florio in May 1973. In its first season, the 911 Carrera RSR won three international and seven national championships, laying the foundations for the success that the 911 would have in the following decades. At the International Race of Champions (IROC), held in October 1973, American Roger Penske lined up 12 identical 911 Carrera RSR 3.0s, in which drivers from different categories competed. But with the 911 Carrera RS 2.7, Porsche didn’t just create a sports car for the racetrack, but a car that customers could also use for everyday driving. The 911 Carrera RS 2.7 took the grand touring car to the racing circuits. 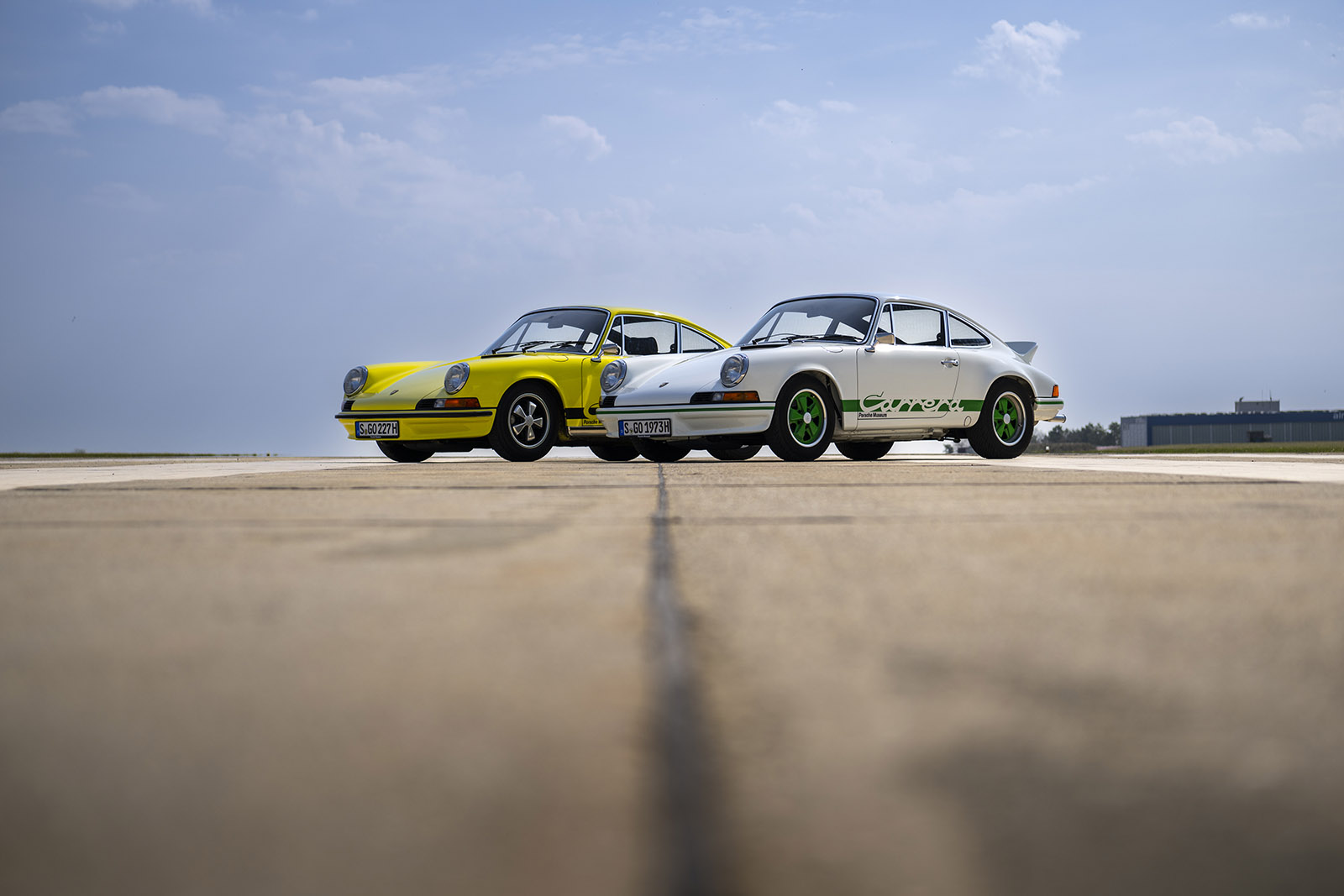 The Carrera name. The “Carrera” lettering first appeared on the 911 Carrera RS 2.7 along the side, between the wheel arches. The Spanish word translates into English as “race” and the initials RS on the rear spoiler stands for “Rennsport” (race). Porsche was inspired by the Carrera Panamericana for the new name. In 1953 the marque achieved its first category victory in the endurance race, with the 550 Spyder. Subsequently, in 1954, it ranked third overall – sensational news that led to the addition of the new name. In the years that followed, Porsche used the Carrera name for the more powerful cars with Fuhrmann engines with four camshafts from 1954, such as the 356 A 1500 GS Carrera or the 356 B 2000 GS Carrera GT. The Carrera lettering was on the rear of the 1963 Porsche 904 Carrera GTS, while on the 1965 906 Carrera 6 it appeared on the side, behind the front wheel arch.

The lettering on the sides. There were other eye-catching design elements in store as well, including 29 paint tones, some of them stunning, of which 27 were mass-produced. Among them were available colors such as Bright Yellow, Red and Sanguinello Orange. There were also different customization requests met by the manufacturer, with specific colors and combinations that combined the color of the wheels with the bodywork or the Carrera lettering on the sides of the white cars with red, blue or green lettering. The inscription still retains its pre-eminent meaning today, as does the famous initials RS. It is always found on the sportier 911 models, as it was originally.