With its drivers, its prestigious cars and their glorious placements, the Sant Ambroeus filled the sports chronicles of the golden age of racing and was the most successful Italian team. Rebuilt in 2019, it has recently come back into vogue with the first official release while trying to reconstruct its historical archive

When it celebrated its first ten years, the Sant Ambroeus Scuderia organized a pleasant meeting in a Milanese hotel and donated a “modern ambulance” to the Monza racetrack. It was February 15th 1961 and, as reported by Il Corriere della Sera the following day, the Scuderia drivers had already participated in “over 6,500 events, winning more than 750 victories“. Impressive numbers, especially considering that the association’s primary purpose was the weaning and promotion of budding pilots, who later became important. Like Ludovico Scarfiotti, who with the colors of the Scuderia won the Parma-Poggio di Berceto in a Ferrari 2000 and in July 1965 won for the Scuderia both the Trento-Bondone and the Cesana-Sestriere with a Dino 2000 Coupé. Then there was Edoardo Lualdi Gabardi – who triumphed in time trials such as the Trento-Bondone, the Trieste-Opicina, the Coppa della Consuma and the Pontedecimo-Giovi.

Also competing for the Scuderia in Ferrari 250 GTO and 250 LM. Giampiero Biscaldi was specialized in endurance races: he competed in the 24 Hours of Le Mans eight times, finishing second in 1965 paired with Lorenzo Bandini in a Ferrari. In 1962 he won the Mountain Trophy in the Gran Turismo category and in 1963 he won the Italian GT Speed ​​Championship. Luigi Taramazzo was also a first-rate driver. Quite versatile, he was one of the strongest gentleman drivers on the Peninsula, racing with Sports, Touring, Formula 1, Gran Turismo cars both on the track, uphill and in rallies. In 1958 with a Ferrari 250 Berlinetta he won the Italian GT Championship over 2 liters class. Not only that, he also managed to earn the overall victory in the Intereuropean Cup and the Mille Miglia of the Mountains (a mix between the real Mille Miglia and the subsequent regular version). Since 1963 he has competed with the Ferrari 250 GTO and 250 LM and the Abarth 1300 and 2000. 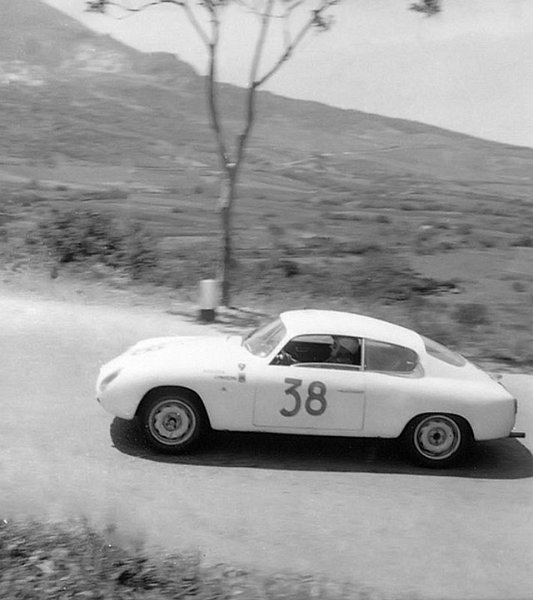 Meeting place for future legends. Again, Roberto Bussinello was another driver who repaid the Scuderia with great satisfaction. He raced above all with Alfa Romeo: he led the Giulia TZ at the FISA Cup in Monza in 1963 to the debut in the race and the Giulia GTA to the Trento-Bondone climb in July 1964. Since 1955, in 13 years he has participated in over 250 races in all categories, from tourism to F1. While later Giorgio Pianta in 1967 won the Four Hours of Belgrade in a Porsche 911 with the Sant Ambroeus. And Giancarlo Baghetti was among the aces of the Scuderia, a leading figure who won the French Grand Prix on his debut in Formula 1 on Ferrari 156 “Shark-nose”. Winner also of the Syracuse Grand Prix and the Naples Grand Prix, he was the protégé of the captain of the Eugenio Dragoni association. The Milanese industrialist, born in 1908, later became Ferrari’s sporting director, where he remained until the end of 1966. In Maranello too he was trying to promote rookie drivers, particularly Italians. In the meantime, as a great prominent figure of Italian motoring as he was, he was also elected, in 1965, president of the Italian Federation of Automobile Scuderie.

The super winner of the Sant Ambroeus. Alberto della Beffa, Franco Martinengo, Alessandro Zafferri and Elio Zagato founded the limited liability company Sant Ambroeus with Eugenio Dragoni, based at number 21 of Viale Luigi Majno, in Milan. And the son of Ugo, founder of the famous Zeta with lightning bolts, provided the Scuderia with one of the first striking results at the Targa Florio, positioning himself first in class and 11th overall in 1955 on a Fiat 8V Zagato. He thus gave way to a series of excellent results which, only until 1965, Sant Ambroeus in general achieved at the “Cursa” five more times. In total, Elio Zagato, who since 1968 has taken over the reins of his father’s body shop together with his brother Gianni, has participated in over 150 competitions, winning 5 Italian champion titles and 82 class or overall victories. Among these, eight at the Intereuropa Cup in Monza, three at the Coppa d’Oro delle Dolomiti and five at the Giro delle Calabrie. Again, in 1955, and again on a Fiat 8V Zagato, he won the Berlin Grand Prix. In that year he has lined up the beauty of nine consecutive victories out of 11 races disputed. Among the Scuderia drivers he was the most successful of all.

The Scuderia that lived three times. There was also the Sant Ambroeus Cup, which in 1959 was already in its sixth edition and was held in Monza, on the entire 10 km circuit, as a race valid for the Italian speed championship in the categories of Tourism, Gran Turismo, Sport and Formula Junior. And on one occasion in which some members of the association were rewarded, the world champion John Surtees was present as guest of honor in the mid-sixties. Then, after more than 25 years of oblivion, the Scuderia resumed winning from 11 May 1995, when it was reconstituted by Dr. Ugo Colombo, Dr. Andrea Imbert, Dr. Roberto Tonali and the lawyer Vittorio Rava, secretary and animator. The president was engineer Galluzzi, an early driver of the association. Members have been honored with national and international titles in not only automotive but also nautical championships. And now, since 2019, Sant Ambroeus has been reborn thanks to the current owner, an important Milanese collector who is relaunching it, thus avoiding the loss of the enormous historical heritage that is part of it.

Great participation in the most famous Italian hillclimb. “First we are rebuilding the archive, trying to recover documents and photos. The aim is also to identify where the cars are, where their drivers and their heirs are”, they said form the Scuderia. The members of the Board of Directors are Uberto Pietra, a classic car enthusiast and collector, Michele Marchianò, a journalist and former editor of important Italian magazines in the sector, and Giovanni Papa, an expert on vintage cars and a former partner of Sant Ambroeus in the 1990s. Later it will be thought of participating in national and foreign competitions, perhaps even organizing a few on their own. But for now the priority is undoubtedly that the Scuderia return to appropriate its history and its identity. This is why access is free and restricted to those who have a connection with this old Milanese glory. That is to say descendants of the drivers, owners of the Scuderia’s cars, enthusiasts in possession of historical documentation or memorabilia. For them, the invitation is to contact the Scuderia through the secretary Emanuele Tiozzo (see contact details below). Meanwhile, in September, many have already seen the revived Sant Ambroeus at its first, bombastic, official release. The occasion was the Vernasca Silver Flag 2021, where the Scuderia fielded two teams: Uberto Pietra on a 1961 Fiat Abarth 850 Scorpione and Emanuele Tiozzo-Ettore Grechi on a wonderful 1961 Maserati 3500 GT. And who starts well…