In case you are wondering about this model’s name, just have a look at the numberplate. It’s an amazing coincidence that we can read “190 SL” on it and it’s for sure a plus of this example: a first series built in 1957 with a totally overhauled mechanic, all demonstrable with invoices.

SL means Sport Light and comes directly from the previous model, the divine 300 SL Gullwing. Also the style of the bodywork is inspired to the one lines of the major sister but without the “Gull Wings”. The 190 SL is in fact the tiny charming roadster of the Fifties. It entered production in 1955 and went on until 1962 selling about 24,000 examples. 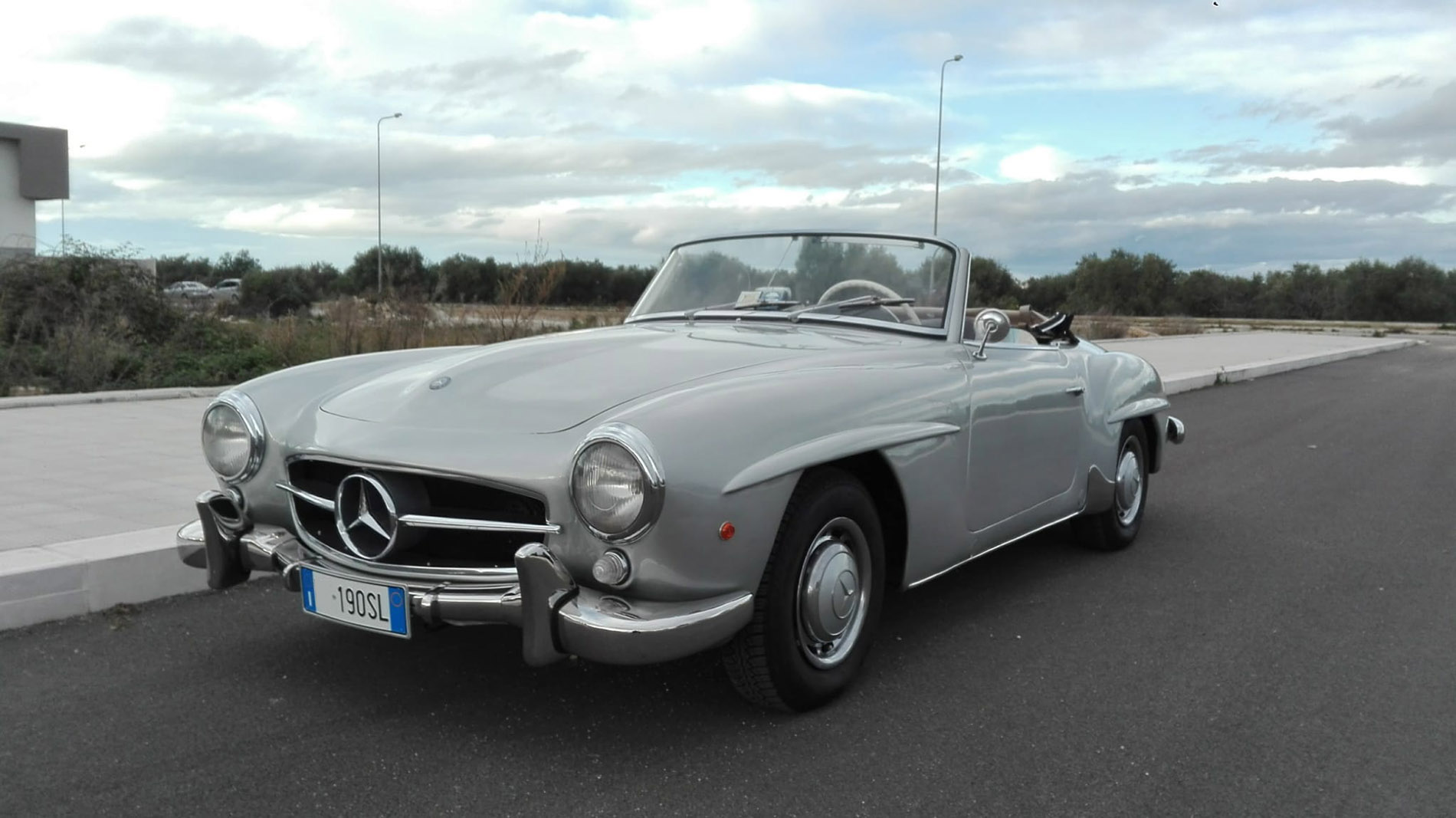 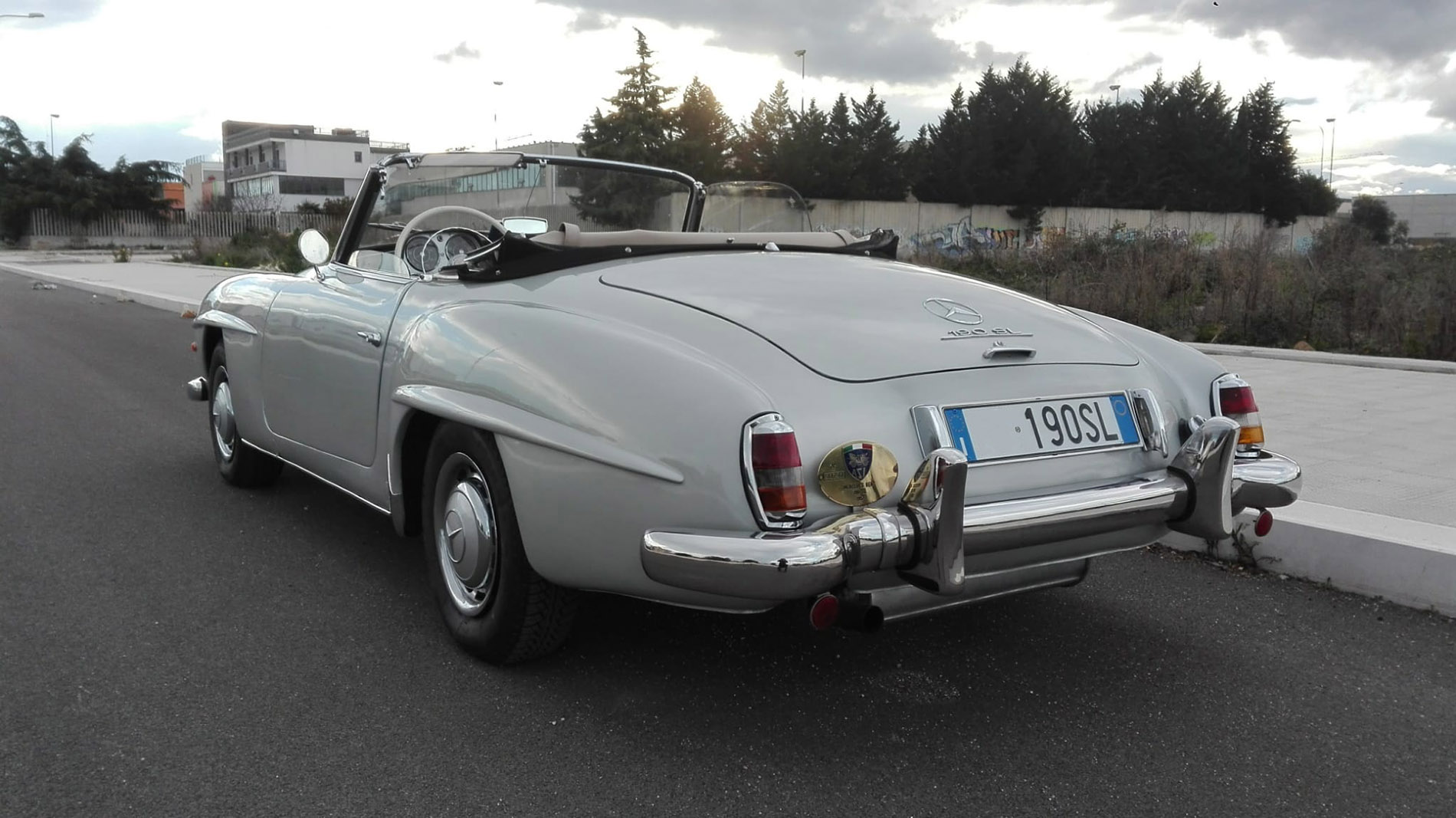 A big success that Mercedes obtained on the wake of the 300 SL which with its high sophisticated chassis and mechanics – and its high performace capability – was very ahead of its time: inevitably it was destined to celebrities and jet set people. That’s why a new series production which would keep the marque’s tradition, assuring good earnings, was necessary to start.

The 190 SL operation also succeeded thanks to the Stirling Moss victory at the Mille Miglia in 1955 with a Gullwing. That was probably the most famous success of the model, which gave many satisfactions and a lot of fame to the German company. Obviously, the elegance of the roadster had its importance as well. It was beautifully refined as it had to compete with the opulence of the cars made in USA since they were designed to be exported in the American market: over there the 190 SL had more or less the same cost of a luxury apartment and it was there that they sold most of the examples. 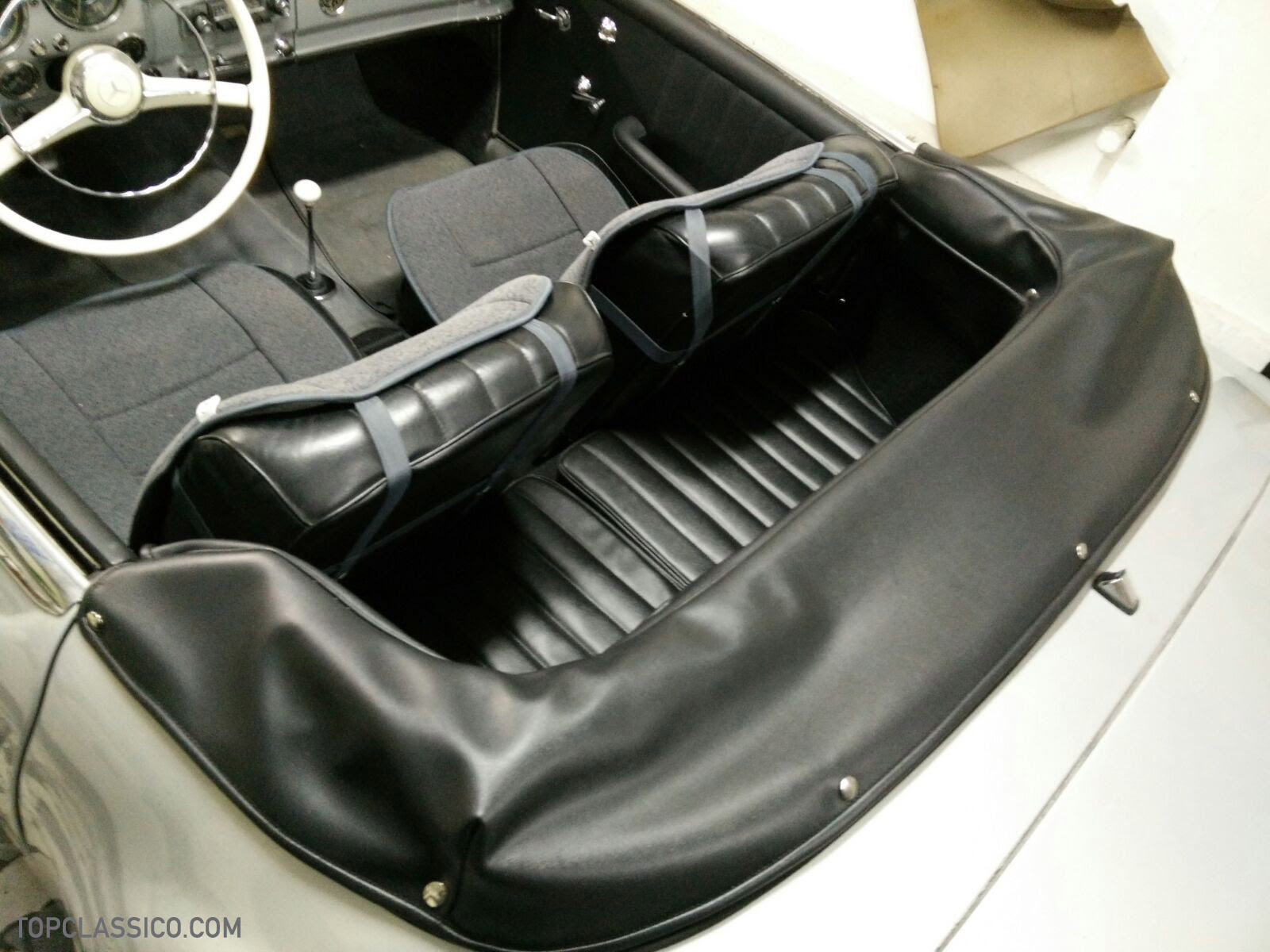 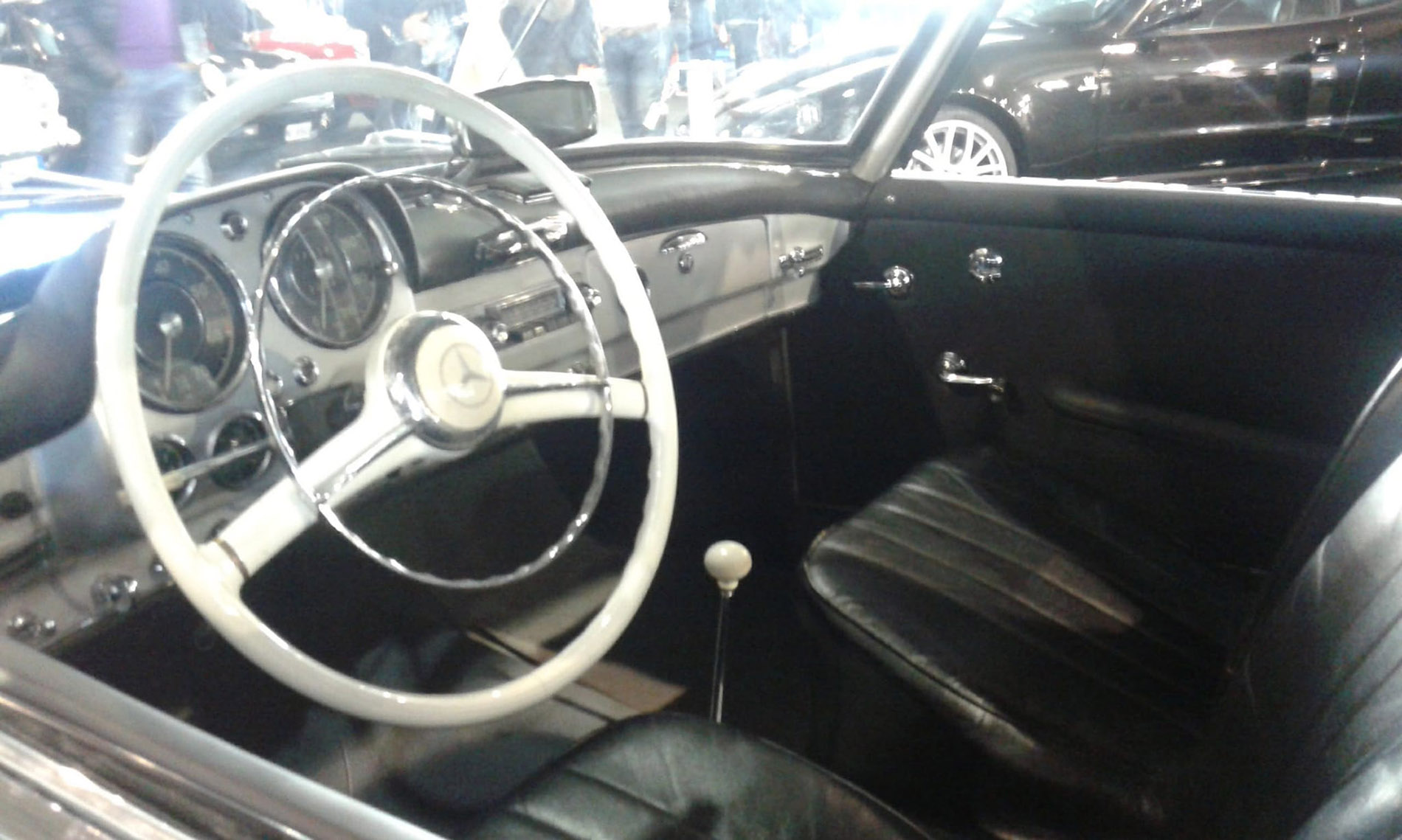 The 190 SL was based on the chassis of the Mercedes 180 Sedan, shortened by about thirty centimeters. The 105 HP single-shaft engine is also a 1900cc 4-cylinder engine derived from production cars. Unlike the sedans, however, which were fitted with a single carburetor, two solex double-barrel carburettors were introduced in the 190 SL. The gear lever is also no longer on the steering wheel, like it was in the sedans, but has been moved to the center, in the tunnel. 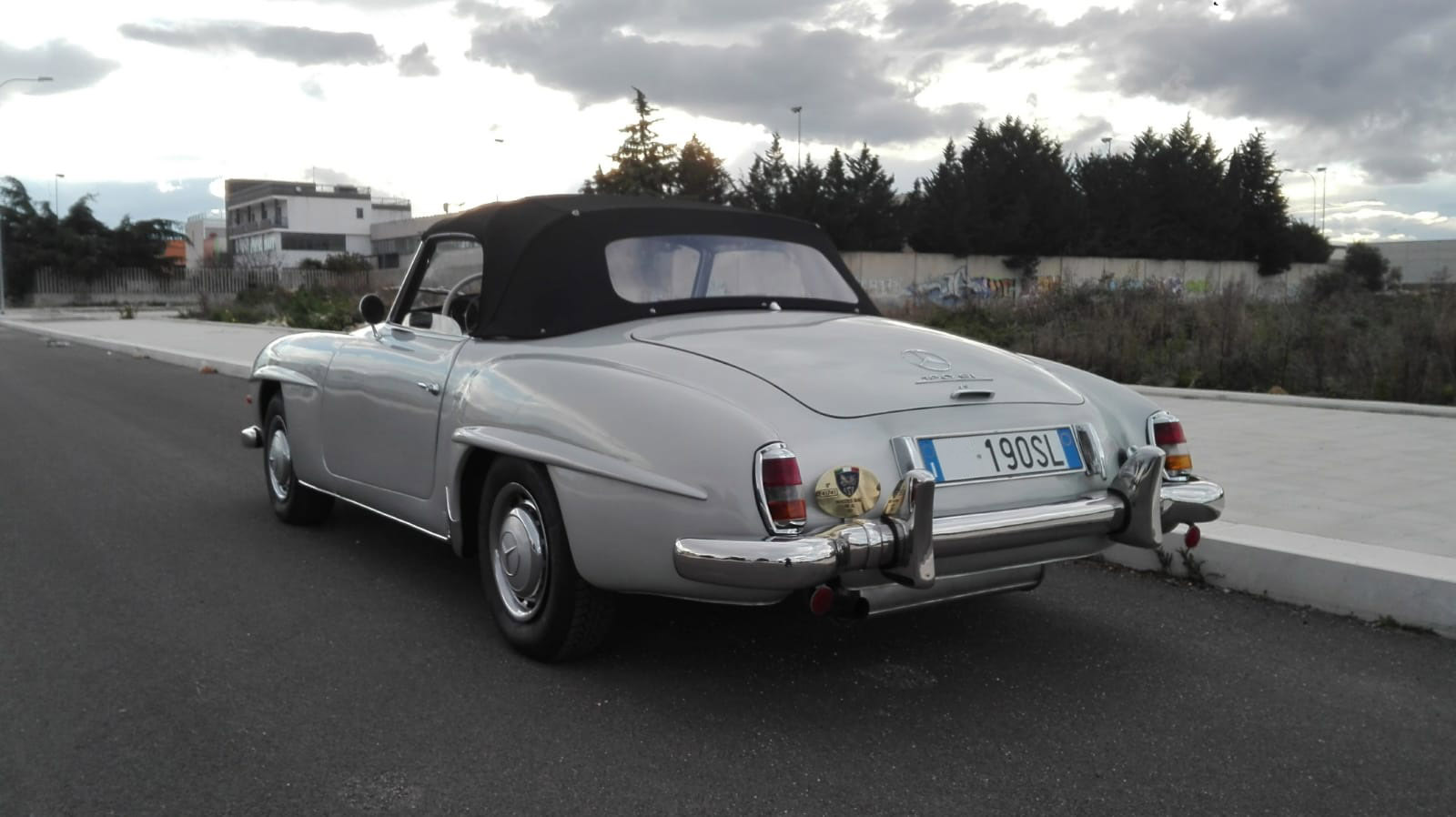 The front of the 190 SL is very similar to that of the 300 SL, while there is only one hump on the bonnet rather than two as in the Gullwing. In the first series, details such as the stone guards and the chromatic profiles on the mudguards were still missing, and also the dashboard had some differences with that of the subsequent series, such as the absence of the clock (which in the example on sale here was added by a previous owner). Only one sun visor was also fitted for the driver in the first series cars, as can be seen in the photos of this example, which is eligible for the Mille Miglia and certified by Asi – Automotoclub Storico Italiano. 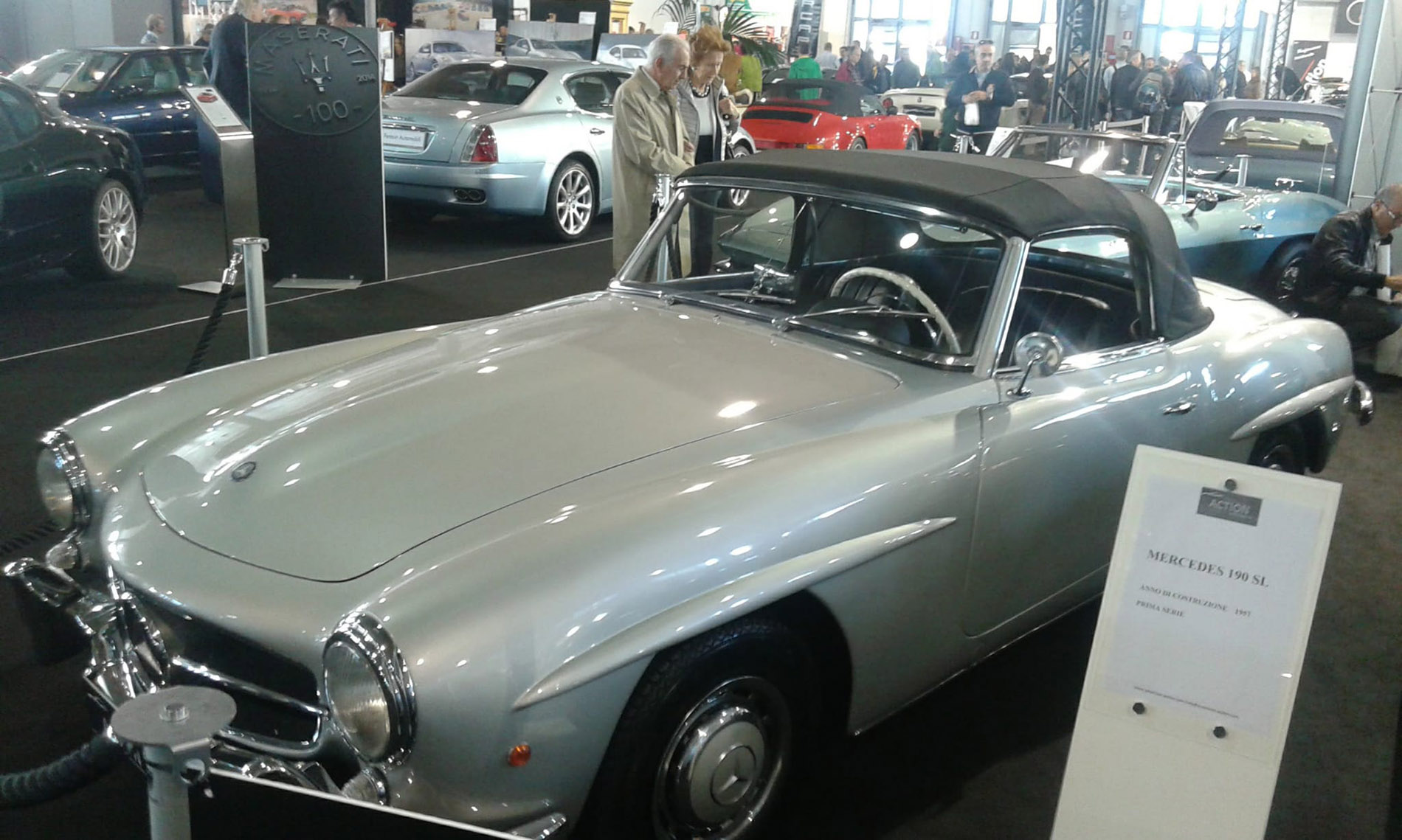